The short-term government Treasury Bill auctions, conducted every wednesday, have dramatically increased the interest rate that the government is paying for short term borrowing. In the 11,000 cr. auction of the 91 day T-Bills (8,000 cr.) and 364 day T-Bills (3,000 cr.) the cost now beyond 8.1%.

Look at the yield charts over 10 years: 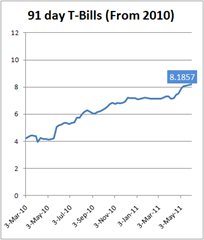 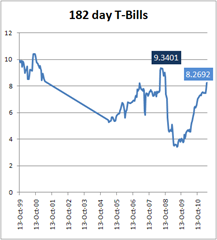 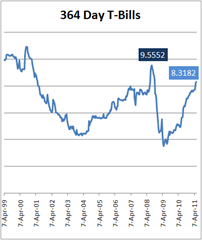 The rates have been going way up. The last time the yields were so high were between July 2008 and October 2008. It’s when the Lehman crisis broke that RBI cut rates down by 1% and that brought yields down. (The Repo rate at the peak was 9% compared to just 7.25% now)

This was the short term auction. Although trading is light, the last T-bill quote in the market that big banks play in (NDS) was around 8.45% for a 364 day T-Bill (which matures in March 2012, so it’s more like a 9 month-er)

This is fairly negative for any leveraged industry that borrows short term. Banks and financiers for one, real estate and infrastructure companies for another. Luckily, till now, the interest rates being paid on short term CDs and Commercial Paper (CP) is still 10-11%, unchanged from March. (CDs are short term wholesale borrowing through <1 year bonds by banks called Certificates of Deposit, and CP is the same thing for companies) But if the T-Bill rates keep going up, those CD and CP rates will go up as well.

Cues: Diesel price will probably be hiked on Jun 9 but it’s not quite a given, since the political situation right now is shady. On Jun 16, RBI is likely to hike rates again, probably another 0.25%. This is going to be a rough month, volatile both ways.

I would be very selective in the market now – long very specific small stocks and short the overall market.