The RBI is unhappy about inflation, it seems. To a large extent, inflation is caused by an increase in the money supply, largely by the central bank adding money. [1]

Summary: There are only that many rupees available today, as much as RBI has “printed” or has in reserve. If the RBI prints more money that goes into the system and inflates rupee prices, because the goods produced are now spread across a larger number of rupees. (yes, there are nuances)

Money multiplies when in the system – for instance I put in Rs. 1000 in bank A as a deposit; the bank can lend about Rs. 900 of that to someone else who, let us say, puts it back into Bank A as a deposit, which then lends 90% of that, and so on.

Before and after the multiplier effect comes into play, let’s to see how much “base money”, or in RBI terms, reserve money exists. This is the money that the RBI has effectively printed. I use the term effectively, because nowadays we don’t need to print money as notes anymore; RBI can directly credit accounts with money, it’s just a flip switch.

M3 – that is, after we consider the multiplier effects – is also charted. M3 is the “broad” money supply – that is, it includes the reserve money and the resulting multiplier.

In M3 is the currency with the public (part of reserve money), Demand deposits (money in current accounts etc.), Time deposits (in FDs) and the outlier “others”. 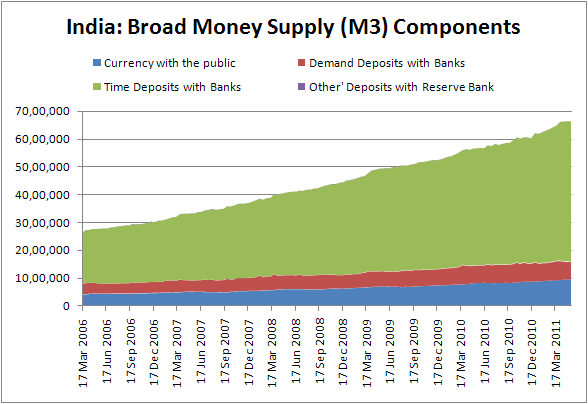 While there is no stopping money supply growth, it’s interesting to see where the growth of money has happened. Get’s look at M3 versus just the currency printed – what’s grown faster? 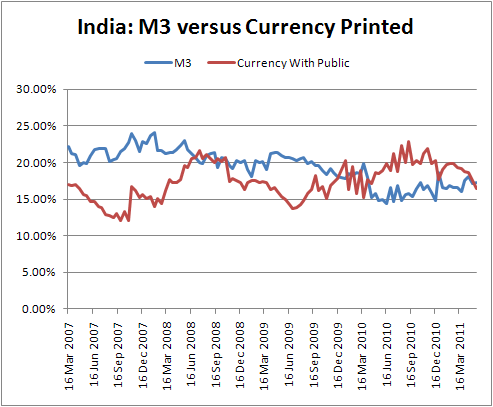 Currency growth is starting to moderate but is still very high at 16%+. 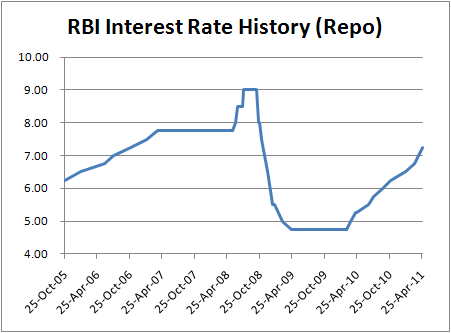 Now let’s get to the point.

Why does the RBI print rupees? It can’t just print for no reason. It needs to add something on the “assets” side of the balance sheet. It will either buy Indian bonds from banks and give them rupees, or buy dollars and give rupees. The rupees thus created adds to the base money supply which will eventually, over time, add to the broad money supply.

How does the dollar matter? Well, it turns out RBI have been continuously buying dollars. In the last one year it has bought over $31 bn dollars – sure, some of that is a euro move against the dollar, but even $30 billion is a lot – that’s about 1.3 lakh crores, which accounts for most of the increase in currency from 8.25 lakh cr. to 9.61 lakh crore in the last one year.

Effectively, had we stopped buying those dollars, we would have had a much smaller increase in money supply. (The RBI did buy some Indian government bonds too but that’s a good thing; we should not be owning dollars) The increase, to $310 billion from about $280 bn, does very little for us, doesn’t it?

And then: in just the last two months, since April 1, 2011, the RBI has bought over $4.5 billion. That’s about 35,000 crores, another 4% increase in our money supply. This, when inflation is so high that the RBI got its knickers in a twist and raised interest rates 50 bps instead of the regular 25 bps.

I would rather have the dollar at Rs. 40 (it’s Rs. 44 today) than interest rates going bonkers. As would most of us, I imagine. The RBI should simply stop buying dollars.

To understand this better, you need to go through the excellent set of tutorials by Salman Khan at the Khan Academy, starting from this one: