HSBC-Markit have released the India PMIs (Purchasing Manager Indexes) for May 2011. The overall composite PMI came in at 57.7, down from 60.7 in April. Above 50 is expansion, so we’re still expanding but at a slower pace. 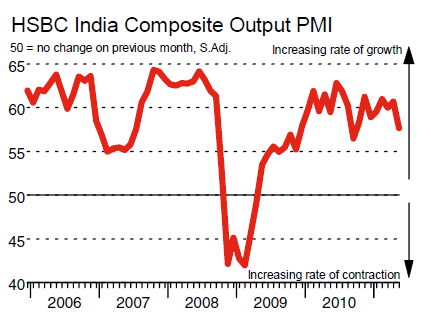 This is the lowest in six months but we’ve seen downward spikes earlier. Probably means little.

The Manufacturing PMI, though, came down only marginally, at 57.5 versus 58. The market looks shaky at this point and this PMI slowdown is not great news.

But what else do you expect? The reason rates are rising, and the reason for RBI to keep raising, is to slow down growth. So it’s happening, finally, after 13 rate hikes, and we’ll probably see contraction (<50) figures soon as well.