From the WSJ: The Great Property Bubble Of China May Be Popping 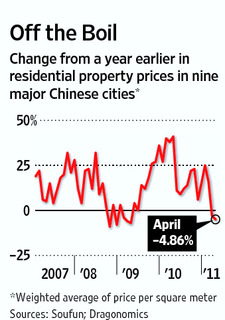 Residential prices are heading downward in some major cities, damping some undesired real-estate speculation but raising the prospect that the Chinese economy may slow more rapidly than anticipated with profound consequences for global growth.

Already, in nine major cities tracked by Rosealea Yao, an analyst at market-research firm Dragonomics, real-estate prices fell 4.9% in April from a year earlier. Last year, prices in those nine cities rose 21.5%; in 2009, the increase was about 10%, as China started to recover from the global economic crisis, with much steeper increases toward the end of that year.

You must watch this awesome visualization and videos by the WSJ on China’s popping bubble, and how it evolved.

According to the Economic Times, though, India’s doing very well: Property Prices in Delhi are up 10-45%

Property prices in the Delhi NCR region have escalated between 10-45% in the last one year, says a study by real estate portal 99acres.com. This increase in prices indicates that the sentiment in the sector has improved drastically since the slowdown.
…

Recent months have seen a slowdown in demand for homes, bringing down sales volumes dramatically. One of the main reasons for this demand slump is the increase in rates across the market, especially in Noida and Gurgaon, along with climbing interest rates.

I have known of transactions in Sohna Road that were up 25% or so. But I doubt it lasts, or that it only “stabilizes”.