Three Chinese companies, listed in the US, have recently been in the news for cooking their books. The revelation that they made up numbers has taken their stocks largely off the trading networks, or dropped them to some serious lows. They’re now called FraudCaps. I list three of them below.

This Chinese company was supposed to have operated at TV advertising network on inter-city express buses in China. They announced awesome results – in Q3 2010, they had net margins of 166%. Unfortunately much of this was made up, it turned out. First Citron Research said on Jan 30 that the listed US stock, a reverse merger of a chinese company with a publicly listed company, was too good to be true. Muddy Waters published research on March 2 that the company wasn’t all that it seemed.

The company had less than half the buses it claimed to have, based on reports from real customers. CCME’s hardware was not installed on many operators’ buses even though they claimed them as customers since 2008.

The auditors, Deloitte, were supposed to be above board, but even they had been misled. They resigned in March saying they couldn’t trust management figures anymore. The stock was halted from trading for a while and then opened more than 80% down.

John Paulson, the legendary investor who shorted sub-prime and made billions, lost $720 million in this stock. Sino Forest is a tree-plantation owner in China, and a Muddy Waters Research Report showed that it had vastly overstated its Yunnan timer investments (by $900 million). The Globe and Mail then did on-the-ground reporting and found out that what was reported by Sino Forest as 200,000 hectares of timer rights was actually just 14,000 hectares. And then, the company uses complex structures through intermediaries that make its financial reporting very difficult to understand.

The shares have since fallen from the Canadian $18.21 levels before the Muddy Waters report to a C$3.00 yesterday. Results that were recently announced showed a decline into losses (C$0.09 per share or $22.4m loss) after expectations of an $0.22 per share profit. Some of the losses were because of the stock price fall, as the valuation of certain convertible bonds changed. (Incredible, isn’t it? That the results should be impacted by a stock price? It used to be the other way around)

The verdict is still open; this share hasn’t been halted.

This reeks of Satyam. NYT writes about how Deloitte Touche Tohmatsu (DTT) resigned with an incredible letter, saying that they can’t trust management anymore. DTT wanted to make sure that the bank balances reported by the company were accurate, so they independently contacted the bank head office. Note, not the branches, the head office.

That caused a huge panic at Longtop, where even the COO intervened with the bank saying DTT wasn’t really their auditor, and threatening DTTs staff against leaving Longtop premises unless they left audit files behind.

Deloitte had already learnt from bank staff that there was no record of certain transactions, that the company didn’t have as much cash as it said, and it had more debt than it revealed. On 20 May, the Chairman of Longtop, Jia Xiao Gong, told DTT on the phone that

“there were fake revenue in the past so there were fake cash recorded on the books”. Mr. Jia did not answer when questioned as to the extent and duration of the discrepancies. When asked who was involved, Mr. Jia answered: “senior management”.

Their CFO resigned, and the stock hasn’t traded since then.

Sounds like Satyam. Except Satyam forged the bank statements – in LFT, the local bank branches were in on the scheme, and issued their own false statements. It was the HQ enquiry that triggered the panic and revealed the scam.

And There Are More…

Barron’s lists more such stocks, listed and halted, which are potentially more entries in a FraudCap sheet. 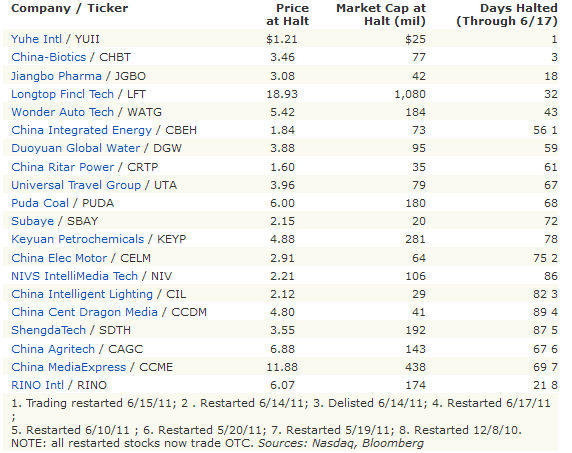 Takeaway: Don’t gloat just yet. Do you think we don’t have enough fraudcaps in India? The media here does NO investigative journalism. The short players are far less influential and research-worthy than the US players, and Indian companies don’t even need to reveal information in the kind of detail necessary for deep research.

But when companies like Network 18, Pantaloon Retail and others create unnecessarily complex ownership structures and do de-mergers and mergers often, it often makes me suspect their fundamentals.

More important than the numbers, are whether you can trust the numbers. In India, I can never have more than a 50% trust, so I go with certain levels of gut-feel and double-checking. But we definitely need more researchers to reveal the sordid side of fraudcaps in India; in the next few years, many will show their true colours.