In the annual policy statement release, RBI has significantly changed its stance from

"We don’t want to tighten too much and hurt growth"

"Holy moly, we have to stop this inflation thing, even if it means lower growth".

Inflation is a Problem 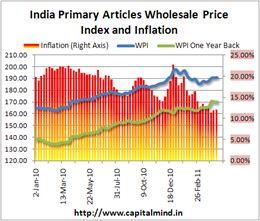 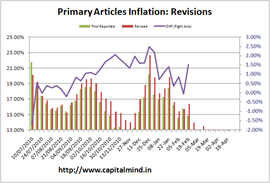 When Primary Articles inflation goes up – the manufacturing index will follow. Plus the revisions mean that Feb is likely to be much higher than the original figure reported (Monthly inflation release contains the full data – weekly, we only get primary articles and fuel inflation, which misses out on 65% of the index data. The data we get shows a revision hike for Feb – but the Feb revision on the full data will only be known around May 15th)

Growth is okay but may be subdued 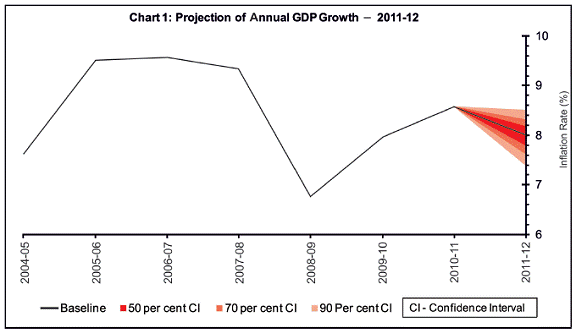 The Repo now becomes the operational rate. Earlier the RBI would announce separately the Reverse repo rate (which is the rate at which banks can give RBI short term excess cash and get interest). Now the reverse repo is fixed at 1% below the repo rate. Another rate, the bank rate is now defunct.

Instead of using Repo is the only rate, the RBI has decided to look at the overnight call money market – where banks borrow from each other – as the operational rate. That means it will decide to move money in and out depending on how the call money rates go – and they should, in normal times, be between the repo and reverse repo rate.

A new "Marginal Standing Facility" (MSF) will be created for liquidity purposes. Currently there are two repo/reverse repo auctions – the first and second "Liquidity Adjustment Facilities" (LAFs). The Second LAF will cease to happen from May 6 – so I presume the MSF takes over. The difference is that the rate of interest of the MSF borrowings for banks is 1% above the repo rate, which is 8.25%. That means if they are desperate for money they pay 1% more, and for this borrowing they get an exemption from the 24% SLR they need to maintain.

This is a pretty strong statement:

Some of the key issues that have arisen in the banking sector are inadequate loss-absorbing capital; insufficient liquidity buffers; excessive build-up of leverage; procyclicality of financial markets; focus on firm-specific supervision and neglect of macro-prudential supervision of system-wide risks; moral hazard from too-big-to-fail institutions; weak governance practices; poor understanding of complex products; and shortcomings in risk management

To deepen the market, the RBI has rightly decided that liquidity at the sell end has to be addressed so, they’ve allowed short selling (after borrowing) g-secs for a period of three months from the current 5 days, and will introduce credit-default-swap regulation soon.

Banks will have to provision more. First, remember that NPAs (Non Performing Assets) are those loans where the borrower has been delinquent (not paid principal or interest) for more than 90 days.

A large part of margins are related to proper provisioning and I believe this will hurt bank margins in the long run.The restructured loan provisioning is likely to be the biggest impact.

SB accounts ha
ve been paying out 3.5% interest, which is hugely negative. There has been a call to deregulate these rates, but bankers are protesting. Such SB accounts are about 20% of bank assets, and I guess they would be around 10 trillion rupees (10 lakh cr.). RBI has hiked the interest up to 4% a year.

I would imagine this costs the banks about Rs. 5,000 cr. per year. It will hurt margins as many banks have run to the CASA (Current-Account-Savings-Account) bandwagon.

The Rupee as a Trade Currency

Quietly, the RBI has started to make the rupee useful as a currency of trade. While foreign individuals can still not hold rupees, they have allowed foreigners to hedge their Indian rupee exposure with banks in India, for their trade values that are quoted in rupees. Put simply, currently trade happens in dollars, and an Indian importer/exporter spends in rupees and earns in dollars, so has to hedge away the exchange rate risk by going to a bank. The trade could be denominated in rupees instead, but such hedging facility wasn’t available to foreigners; now, they can do so.

(This is only for trades invoiced in rupees, so it’s a baby step. Eventually they will have to free it all up)

The Nifty fell 2.5%, steadily through the day. The stock markets took it on the chin that growth would be lowered. Plus, a good portion of the Nifty is banks and financials so obviously they would get hit. The BankNifty fell over 3%, and Axis Bank and SBI over 4%.

In commercial paper, there was hardly any impact, with the rates hovering between 9.5% and 10% anyhow. But that impact will be seen later, not now.

What do I think?

It’s negative for everything except debt free companies, and even there you have to be careful. Pharma and FMCG look like they’ll come through the best. I’d avoid real estate, banks and auto for the near future.

Oh and if you have a loan, prepare to pay more. I expect retail loan rates to go up 1% on average, over the next three months.

But this is very good in the long run. We need to slow down in order to get a better grip on ourselves.