Question from a reader:

My housing loan is being disbursed in stages as my house is getting complete. My bank charges me only the interest until I get possession. Can I pay the Full EMI instead?

Of course you can. Banks don’t want you to, largely because it increases the total interest you have to pay.

Banks disburse loans in stages during the construction, and your total loan amount keeps going up. Initially, the loan amount is small, and you are charged only interest, so you get to pay a small amount. But you are likely to be able to afford a larger amount, and where you can so afford it, you must pay back. Doing so will reduce your principal, and a lower principal means a lower interest payout.

Assume both people below take a 40 lakh, 20 year loan. Construction for 2 years, loan is disbursed at 20% every six months, with 20% upfront. Loan interest rate is 10%

Amit: Pays only interest during construction.

Yousuf: Pays full EMI through and through.

Instead of boring the life out of you with figures, I have graphs. Nice lovely looking graphs.

First, the way principal is repaid: 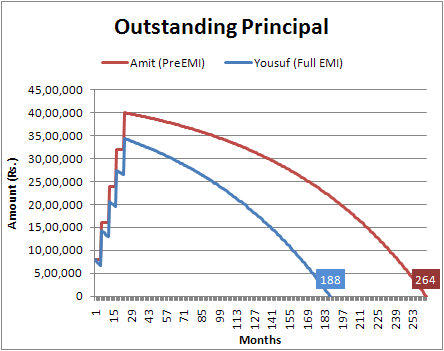 Yousuf takes 188 months to repay, which is about 16 years.

Amit takes 264 months or 22 years. That makes sense – his 20 years begin after construction is done.

Now the boring graph of how much interest is being paid. 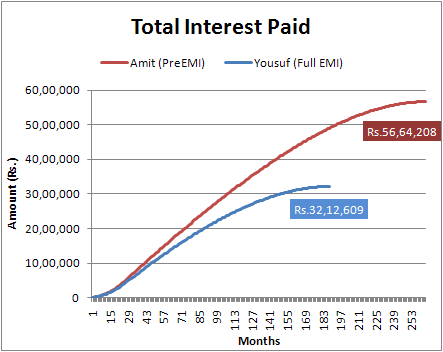 The bank loves Amit for paying 56.64 lakhs. Heck, they might even ask him out to a Golfing event, and give him a lovely wall clock with the bank’s name inscribed, so that he can get his friends to take a loan.

Yousuf on the other hand pays just 32.12 lakhs. He won’t get a silly wall clock but he thinks the 24 lakh difference can buy him a lot of wall clocks. With no advertising.

All the Financial Advice You’ll Ever Need

Hey wait, what about the time value of money?, asks the MBA type. Obviously since Amit is paying over a longer time, won’t the value of money be lower in later years, because of inflation? I mean if Yousuf pays more today, that money is more valuable than Amit who pays more tomorrow?

So let’s provide for an inflation of 8% a year, and then “value” the future cash outflows by lowering the number of “today’s rupees” that it costs. 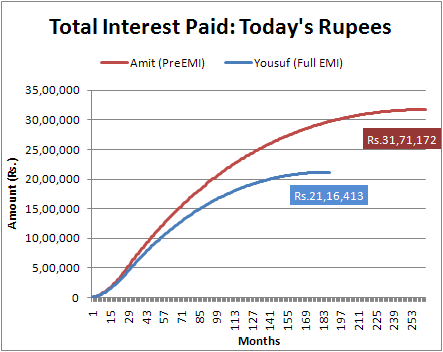 There is a difference in “current” taxation laws. In a Pre-EMI situation, all interest paid prior to construction is deductible from tax, but not when you pay it. All such interest is added up to the possession date, and then that amount is divided into five equal installments, to be deducted over five years.

In any year, this interest deduction, for self-occupied property, is limited to Rs. 150,000. (Under current laws)

For both Amit and Yousuf, interest paid in years 3 to 7 (the five years after possession), is already greater than 1.5 lakhs per year. So both of them get NO additional deduction for pre-EMI interest.

On the principal front, the amount deductible is a sum total of Rs. 100,000 for housing loan principal. This is not applicable on the principal portion of the full EMI Yousuf pays. But since the current limits are 100K for principal, and the principal repaid by Yousuf from years 3 onwards (when even Amit gets deduction) is greater than 100K per year, there is no added benefit for Amit (or, in that vein, a disadvantage for Yousuf).

Things may change once the DTC comes into effect. (For example, the current draft of the DTC provides no home loan principal deduction)  Therefore I wouldn’t do anything differently based on tax law.

Practically, you can afford the Pre-EMI today. Why do I say that? Because if you couldn’t afford it, banks won’t give you the loan in the first place.

So just pay the Full EMI.

But if you ask me, I would completely avoid buying under-construction properties; it is not worth the pain.