In an email, [Name withheld on request] asks:

I was reading recently about rule change in March 2010 forbidding equity funds from paying dividends out of the unit premium reserve. My understanding is that dividend payments have come down after this and the popularity of dividend paying funds has declined (would you agree with this?) I can see two explanations for this.

One is that investors somewhat irrationally chased dividends before the rule change and some fund companies took advantage of this by paying large dividends to attract flows even though the dividends did not signal actual returns.

Another explanation is that investors used these high paying dividend funds for dividend stripping.

Which of these explanations is more prevalent? Are there certain fund companies that actively tried to attract investors by paying large dividends out of unit-premium reserve versus other companies that did not do this? I am looking for examples where it is easy to tell that investors were really fooled by dividends as opposed to just the dividend stripping (if you can think of any such examples that would be great).

This is a brilliant question. First,

What is Unit Premium Reserve?

So why is shady to give dividends from it?

Because it amounts to paying off one unitholder by getting money from another unitholder. Let me explain.

Now another person comes in before the dividend date, and buys another 1,000 units at Rs. 25.

Distributable Surplus: Rs. 15,000 (A surplus doesn’t change when new units are only bought).

But there is only Rs. 15,000 as distributable surplus!

So the fund will have to dip into the "unit premium reserve" to pay the remaining 9,000. At some point this is stupid, because you are using the new investor’s money to pay him dividend right back. And since people are attracted to dividends, they’ll pile on without realizing this.

How is this different from stocks?

In Stocks, companies don’t issue fresh stock. If you buy, you buy from someone else, the total number of shares outstanding doesn’t change. (Yes, you might argue that the company can do an IPO in between. In any case, companies can’t pay dividend from premium reserves, so the point is moot)

But SEBI decided to ban the practice precisely because it was being used by small funds to shore up AUM. (Full Circular)

What? Give me an example.

In November 2006, the fund had just Rs. 59 cr. in assets, and the NAV was Rs. 194. They decided to informally tell distributors to attract customers saying they would pay out Rs. 100 (or 1000%) as dividend over the next four months. (Read: Birla Sun Life Tax Relief 96 – beware of dividend pushers!)

Note: for each dividend, the NAV will fall by the same amount. (See this video) So in December you’d see the NAV fall by Rs. 25, in Jan by another Rs. 26 and so on; in end March it would end up being less than 100.

By this time, because of salivating distributors (remember, this was before entry loads were banned) the fund AUM had increased to 300 crores!) 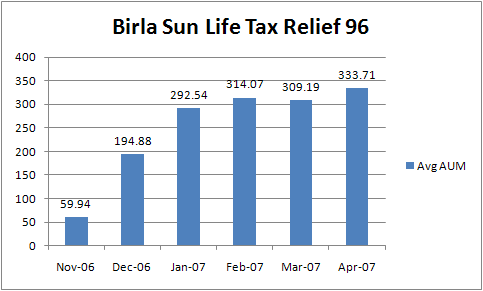 That adds up to Rs. 140 crores (and I think I’m underestimating the payout) of dividend paid out.

But they started with a distributable surplus of just Rs. 57 crores! (see earlier)

What they did was to take the fresh money coming in and give it back to investors.

This is a great way for an ELSS scheme to work, because you put in the money for the tax benefit. But it’s all locked in for three years! To avoid that, the fund pays out money as dividend, and voila, you get the tax benefit for the whole amount, and lock in only a part of it.

(See: Dividends in ELSS funds have an advantage)

Oh okay. So now a fund can’t distribute its unit reserve as dividend?

Not anymore. Since SEBI has said it can’t. What it actually generates as a surplus, it can distribute. That means it has to invest and make a profit to distribute. Which makes sense.

What about the other questions?

Did investors somewhat irrationally chase dividends before the rule change?

Yes, and they continue to do so in regular equity funds. Not that we can make out much now, but I still hear of distributors pushing clients to put in money ahead of a dividend. In tax saving funds, though, there was a rationale – that it gave them a tax saving alternative without locking in money.

Did investors use it for dividend stripping?

Dividend stripping is not tax efficient – the tax department does not allow it anymore. (The loss on selling after the NAV falls is not considered if it’s bought and sold within three months of the dividend)

Has the popularity of Dividend Paying Funds declined?

I don’t know. In general dividends are more attractive for shorter term debt funds for their tax advantage. In equity funds, the dividend option is used as an automatic profit booking mechanism. I haven’t checked to see if the dividend option has seen lesser interest.