Once in a while I look at stocks I’d written about and check how they’re doing now. A quick check on Northgate Technologies after a mail from Kaushik threw up this very sad chart: 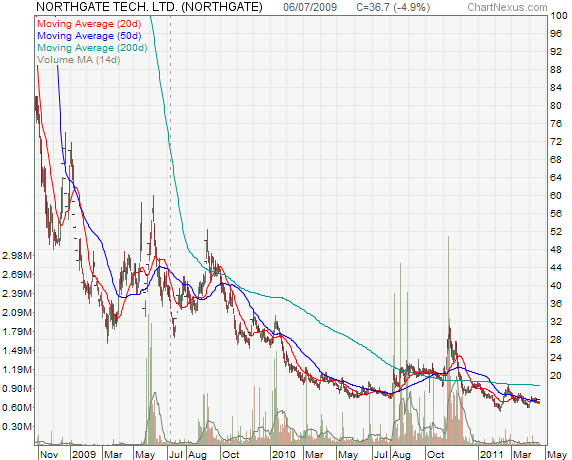 For a while, these guys advertised like crazy on TV, sites such as Bharatstudent.com and such. Now the stock’s nearly dead. They’ve managed to lose an incredible amount of money of their own, apart from their shareholders’.

See that price spike to the 30s in November? They managed to sell 20% as "QIP" to two funds, around 45 lakh shares each at Rs. 20.5. One of those funds has sold about 12 lakh shares already. And earlier, a number of key people resigned and sold shares.

In what seems like a very desperate attempt to create interest, they have a press release saying that they integrate with Facebook. Ooh.