In a board meeting, Indo Asian Fusegear has decided to buy back shares at a price upto Rs. 130 from the market, for a total amount of Rs. 23.19 crore.

This is a terribly disappointing strategy for multiple reasons. (Read the full post)

Alert Reader Karmic_Investor notes that the promoters have withdrawn the “scheme of arrangement” that would have allowed them to siphon off a big chunk of the company. This is great news indeed – but given that that promoters have shown true colours, it may not be very nice to continue with a large position.

So why did they do it? Did Ashish Dhawan use some convincing? Did investors threaten them en-masse?  I wish I knew!

Also, they have changed their name to Eon Electric. I’ll wait for the NSE code change to happen before I refer to them by the new name.

2. Post merger the Metering, Institutional Business and the proposed Power Businesses will be hived off by way of demerger to Advance Metering Technology Limited, an SPV created for this purpose.

4. The paid up equity capital will be equally split between the two companies….

Okay, this sucks. This is one way to attempt to siphon off money as I’d mentioned earlier.

First, how the heck is the company valued at Rs. 128 per share? This seems like just a blatant lie in some way or the other – the company has, in their disclosed statements below, 280 crores worth of investments, very little loans, and just 1.6 cr. shares. That itself is worth Rs. 175 per share. Then you have a factory and all the other stuff which obviously has at least SOME value. How on earth can the valuer say 128 bucks a share? Obviously, this is a sham.

And then, how come the promoter company gets 86.3 rupees a share? I need to see further documentation – I might tap the RoC for more.

If I get this right, the private promoter company has as many shares around, as it takes to split the equity capital equally after the 7 for 10 merger ratio? (Promoter co will have more shares). Meaning, the promoter will go on to own 72% of the resulting company! I hope I’m wrong here.

We don’t know what the promoter co’s earnings will be or any such. But I would like to hear the management on this.

On the face of things, this company is ripping off investors, by diluting them to half their ownership and increasing promoter share instead. There’s a big guy in the current shareholding pattern – Ashish Dhawan of ChrysCapital – and I’m thinking he’s not going to be very happy. Should I dump what I own or protest? Let’s see.

A company that announced results today was zany – an EPS of 157 on a stock price of just Rs. 87!

Indo-Asian FuseGear (INDOASIFU on the NSE) is trading at Rs. 87, and this is the result it announced: 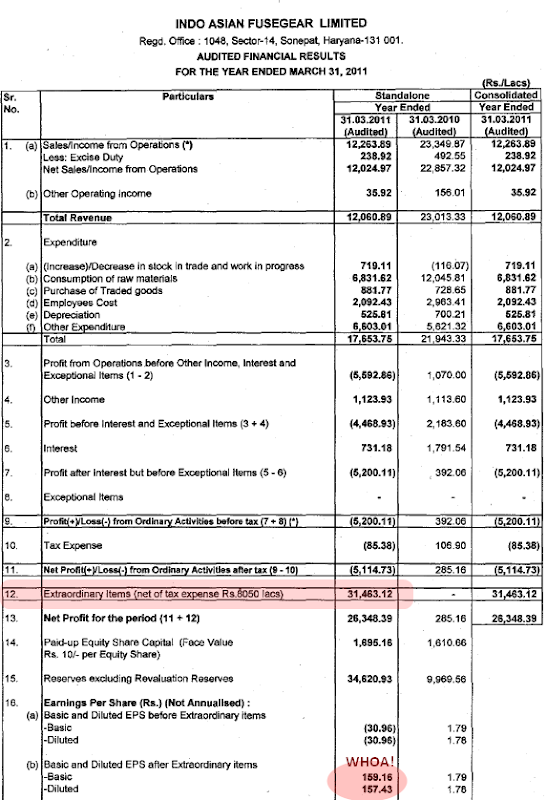 And the balance sheet shows some of that cash. 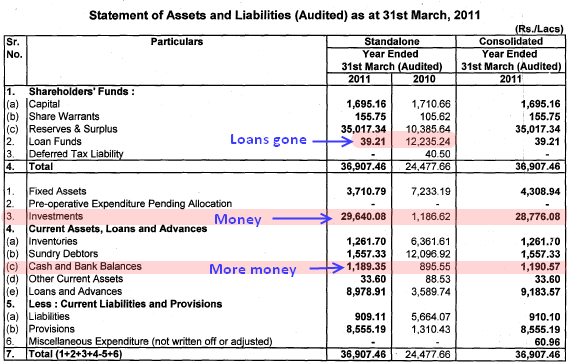 Note: I’m never sure when to believe the fundamentals – while it all looks good, you need to remember that this news was known a LONG time back, and the stock hasn’t gone anywhere. All I know is that this is an interesting situation.

I’m going to do a bullet point analysis – and I’ll keep updating it as I get more data. This is a “live” post of sorts.

Can we trust promoters? 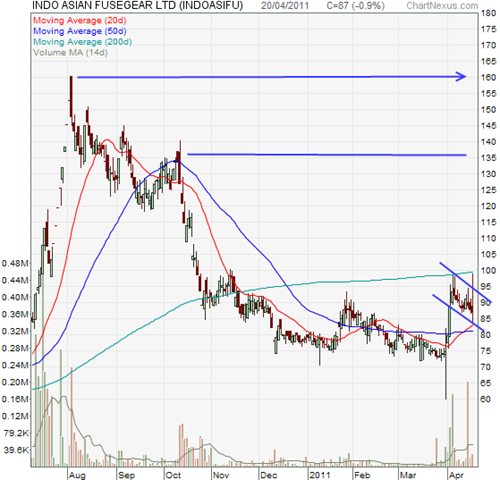 Long some stock. Currently just picking up tiny bits of stock to keep myself interested till I get a handle on things.

VERY long term investment if things are okay, and because this is fundamental driven I need a massive stop loss of some 40% or something. This means I’ll allocate less to this position than I normally would, adding more only when the stock goes much higher.

Note: There’s tons of disclaimers but please don’t take this as advice. At best, it’s about learning.