Infosys announced results today and the markets are not happy, with the stock down severely. I don’t think the results are necessarily worse than expected – after all, they met expectations having given a full-year guidance of 119 on EPS given last quarter. (Actual was 119.4)

The bigger deal seems to be that Mohandas Pai has quit. The CFO who managed a great run in the stock through the early 2000s, and later took over the HR function has now quit the company and the board. It looks like he wasn’t going to get the top job – and with his profile nothing less would have done. I think this is good for both Pai and Infosys, because a finance genius shouldn’t really be in the HR top role, and for Infy it’s time to groom the next CFO. For Pai, there’s no need for money, and his next venture will be awaited. I hope he gets into the software product space or into angel investing.

Back to Infosys. The stock tanked nearly 10% today, and I don’t know why. Don’t tell me it’s the results. Please. Last year also they announced crap results. Last year, the stock went up. Read my post. (Heck I even made some money on it) This is utterly bizarre, unless the investors are mourning the loss of Mr. Pai from the board of a company with 130,000 employees. 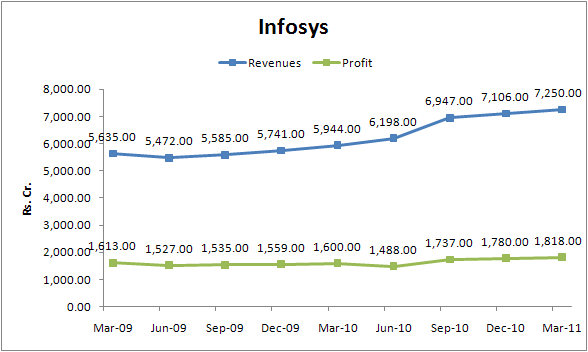 The graph below contains the EPS growth both quarterly YoY (that is, this quarter compared to last year same quarter) and TTM YoY (which is trailing 12 month EPS, now versus one year ago). 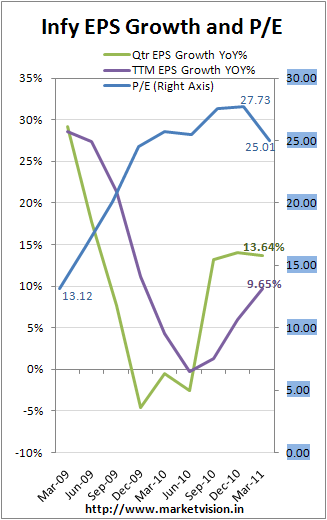 The growth in Earnings per share is still quite low, at the 10% mark and even the quarterly growth (comparison has tapered off to under 15%. That is par for the course in such a large company I guess.

What’s worrying really is that valuations didn’t follow. The stock price has quoted at a P/E of 20+ for nearly all of last year.

You might think that the company has lots of cash which needs to be factored in. They have 16,000 crores in cash, which for the 58 cr. shares in issue comes up to about Rs. 300 per share, and reduces the P/E by about 3 (That is, P/E without the cash). Even that is above 22.

Yes, you can give a premium for management quality. I wouldn’t do much though – you would give like a 1 or 2 higher P/E, that’s about it.

For a company that makes money out of brainpower (or, people-as-robots, whatever you want to call it) the biggest thing you want is people. A continuous flow of people. Pure numbers are silly because one smart guy can do the work of 10 dumb guys (and Infy has 40% "fixed-price" projects, so it’s not as much about billing per head now). But it’s all we have to work with, so here are the numbers: 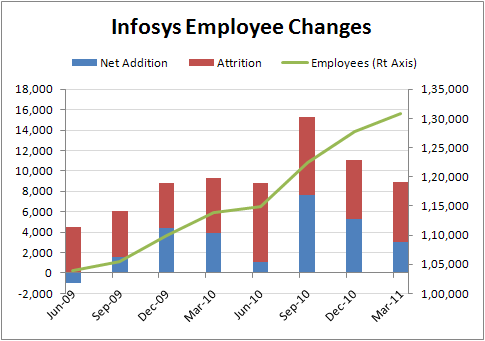 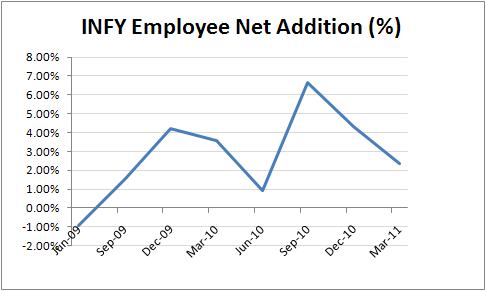 As you can see, the employee additions have been coming down. Net Addition as a percentage of total is also now about 2-3% per quarter. For the last 3 years (since March 2008) employee headcount is up 45%, meaning we only have about 12-13% per year of growth.

But then, March and June are typical off quarters for hiring with the bulk coming in Sep/Dec every year. Overall this year, net addition in pure numbers and percentages has been higher than last year (17K in FY11 versus 9K in FY 10) but it’s still lower than earlier years (FY08: 19K, FY07: 19K). I’m not sure this model will keep working if they don’t have the "inventory" – i.e. the masses they need to keep doing projects.

Considering billing rates stay constant, your employee count makes your growth. Mr. Pai didn’t necessarily do a great job pushing up employee counts. Unlike money, employees talk to each other and leave when you treat them badly. So the brilliant CFO skills may not apply to HR. But honestly, the slowdown in Infy hiring was inevitable; there is their own size against them, there are more nimble competitors who now have money and will poach, and the funnel of hire-able candidates hasn’t increased quite as dramatically.

Why is it overvalued?

Well, first, that’s my opinion. I think there are too many people who buy it because it’s like 8% of Nifty in terms of weight and it can do no wrong because of its fantastic past. Those factors you can’t change unless they change by themselves.

For a company doing 10-14%, and slowing down, would you really pay a 25 P/E? Or even a 20 P/E? Forget management quality – it needs to show in the results at least over a five year period. Forget cash – cash is a burden if you won’t acquire even in the face of slowing-down growth. (Plus, you then have to remove the 1,200 cr. of "other income" also) My answer, like that in ICICI Bank’s case, is "It depends."

I mean, if fundamentals were any useful, I would actually use them. When you see companies with a sub-10 P/E growing at over 30% a year, and their P/Es shrink as their companies grow,  and other companies like Infosys become darlings because at some random time in the past they had done something good, and get 25 P/Es even when they haven’t done jack-shit for five years: I can’t really say fundamentals are valuable.

Looks even more bleak. Now I get into serious opinion territory.

The west isn’t in great sh
ape. Yes, they have extend and pretend, but that only lasts so long. Already, Greece is showing signs of cracking. Ireland, Spain, Portugal, Iceland – all are showing signs of strain, and we don’t even see the headline about how badly their strain will show on Belgium. The US is very intertwined in all of this, and the US has a budget deficit that has our corrupt politicians salivating.

Western economies, and especially the western financial sector, may not have a great thing in the next few years. With interest rates starting to go up, and inflation in commodities starting to pinch, there will be budget cuts, and part of that will be IT cuts. A lot of discretionary spends go out the window.

Add to that my longer term theory that the US Dollar will deteriorate and the rupee will appreciate. With almost negligible local presence and the gross inability to think for India, companies like Infosys (as compared to TCS or HCLTech) will have an enormous amount of difficulting moving growth over. They’ll become utilities and utilities get a P/E of 10.

Rant over. The stock’s not bad. But it’s wildly overpriced, overrated and blah blah. I would short it if the technicals break down some more, but the position size on each lot of 125 is too much – at nearly 4 lakhs a lot, a standard move can hose my capital. But yes, there are put option positions that might be attractive (though expensive today).

I must stop making these Infy posts. They lead nowhere.

I’m not long Infy or (darn) short it.