India’s new IIP data was released recently and here you are with the charts: 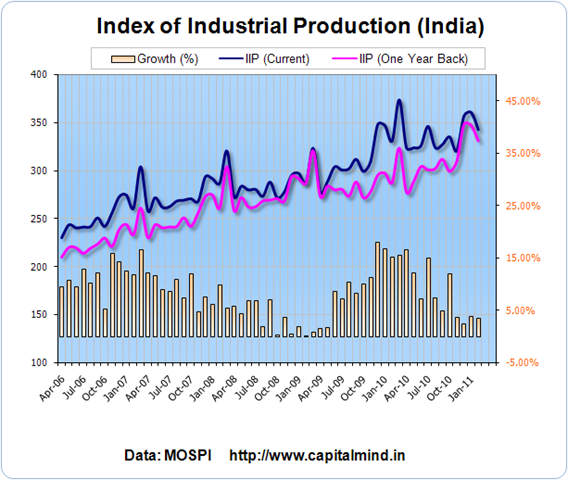 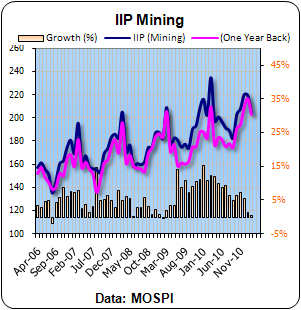 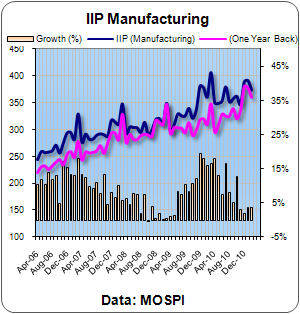 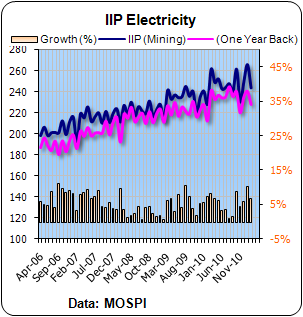 As you can see, the problem is mining: the growth is just 0.59%. There is a sustained downtrend for two months now, so we might be able to assume the beginning of a problem (IIP data is so volatile and so unreliable that you never ever make a firm decision)

Manufacturing at +3.54% is pretty much par for the course. Remember that February has a budget at the end, and that would hold people’s production plans (which is why Feb always has a dip)

Electricity is actually quite strong at +6.75%, but lower than Jan’s +10.47%. Power production is strong it seems, though not much of that seems to be coming the way of Gurgaon, going by the number of times the generators need to kick in.

IIP figures seemed to have spooked markets – but everything here is bound to be reviewed and changed. This time, the October 2010 and Jan 2011 data has been changed, but in no major way – Jan has gone up marginally from the earlier reported 3.69% to 3.95%. It’s very strange though, that PMI figures vary hugely from the IIP figure (though they should be offset a little bit in terms of time, PMI has shown no signs of contraction)

Look at the equivalent Feb PMI: 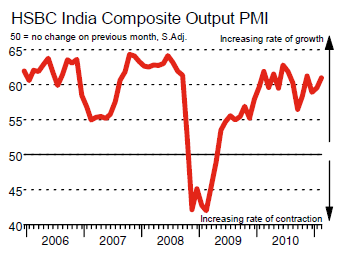 I could build complex analysis from the IIP data, but honestly, I do not trust it. Still, it’s one of the few data points collected.