Strong EPS growth continues and even through the downturn the stock kept EPS going well. Even the Trailing 12 month (TTM) EPS growth has been spectacular.

They also propose to split the stock 5:1. Which should bring the price to levels that "look" affordable in comparison (even if they’re not any different). 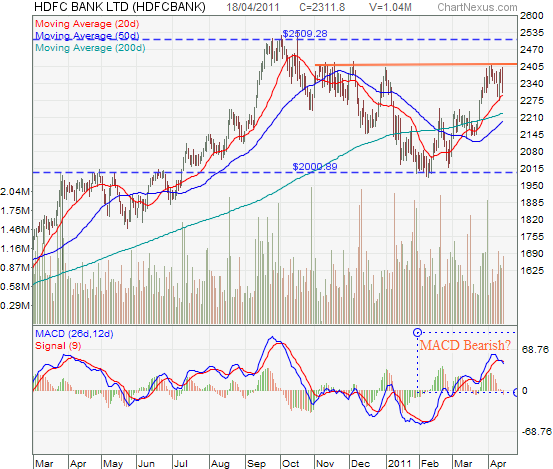 Technically, the stock’s above all near term moving averages, but seems to have slowed down; the 2400 mark is a big resistance. Even beyond that the broad ranges it would need to break are 2000-2500. MACD has just switched to bearish, but it’s still above zero, so it’s not a signal to short.

Given that the fundamentals are strong, and the longer term trend is positive, the long side looks interesting. For a technical plus, you’d want to see 2,400 broken on volumes higher than current averages.

Macro factors are not in it’s favour – there is a lot of concern about inflation, so interest rates will go up; and that is usually not good for banks. But that turning point is a while away, and I think for a while at least, banks will be able to pass on increases in rates to the lending side.

They’re a big retail bank and one of the strongest in the sector and I’m not quite keen to short it, unless there are issues that come to surface which we don’t know yet. Overall, the trade here is to wait and watch or if you’re invested, perhaps use a covered call at 2400 or higher to offset short-term risk of a downmove.