A kitchen appliance company, TTK Prestige seems to be really strong. Despite the broader market having come down 20% or more, this stock is pushing to new highs. I’ve held the stock, on and off, over the last year or so.

They have very good cash flow. According to an interview with Moneycontrol, the promoter said they will be adding substantial capacity in the next year, just with internally generated money. Low debt in a high interest rate situation is always good.

Third Quarter results were excellent, with their nearly doubling EPS from 13.54 to 25.87. Their TTM EPS is 70, which makes their P/E nearly equal to 30 – a very good price for a company that’s just been growing and growing.

They’re a 2000 crore company which is not smallcap anymore, and the story is of the Great Indian Middle Class that will graduate to cookers and better pans and steamers and gas stoves. They’re pretty good – I’ve tried the products myself.

You might say, holy crow, this stock has gone 10x in two years! Is it still worth buying the stock? If the moneycontrol interview linked above is of any relevance, the company’s out to make a profit of Rs. 120 crore in profits. That’s a fairly huge jump from the 70 cr or so that it has in the last 12 months. The P/E then automatically goes to 18. They’re also expanding, and the space isn’t saturated by any means.

Another positive: Not a single promoter share is pledged.

Most interesting is the technical trend – it’s ridiculously strong. For nearly a year the MACD has been strongly positive, and the 50DMA has acted as strong support.The first stop loss, therefore, has to be the 50DMA at 1692. Secondary stops are wide – and in this stock, have got to be wide – at 1500 and then 1400. I’m sticking only to secondary stops as of now.

Plus, I noted a 52 week high first in Jun 2010, and then there was an speculation that it was pure speculation. It wasn’t. 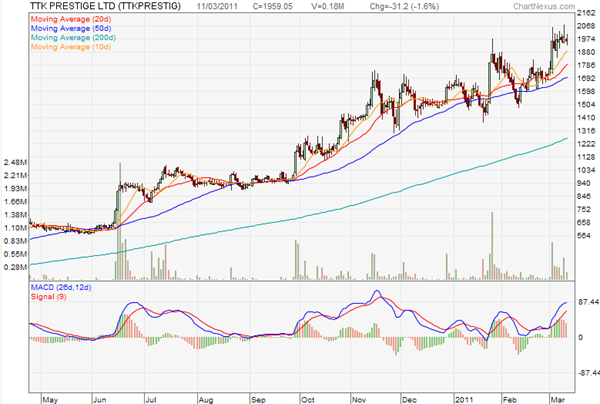 Disclosure: Long. Might add some more if it crosses 2000 tomorrow. There are others close to 52 wk highs and all time highs, though.