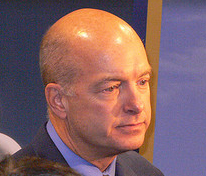 Sokol, supposedly, "is a rich man already" and is therefore, just stupid. Which, after Rajat Gupta and Raj Rajarathnam and Ramalinga Raju, A Raja and so on, is hardly surprising. Clinically, I mean. When you’re rich, your brain has this glaze of "I’m successful so I’m right" which impairs the functionality of the "What the fuck is wrong with you?" part of your cerebrum. Every once in a while the impairment is so severe that even after the drama these very people defend their actions as if there was nothing wrong in the first place. After Goldman Sachs, Citigroup, the entire US political system, Greece, Portugal, Ireland and everyone else, the idea is to vehemently deny any wrongdoing first. Regardless of how much of a turd it makes you look like.

Sokol has, in line with the above affliction, denied allegations of "front running" – or, buying shares before a large transaction takes place, where you can influence that transaction. Long time readers will remember that SEBI in India banned HDFC Mutual Fund AVP Nilesh Kapadia for such front-running, but Sokol seems to be getting away okay. On the defense that he didn’t know Buffett would buy. Or, that he didn’t have the ability to influence Buffett on the purchase.

Buffett has also endorsed Sokol’s view that he didn’t do anything illegal. But Buffett is known for talking his book, so that’s no big deal either. Since Sokol had admitted to Buffett earlier that he owned the shares, and Buffett didn’t protest, any rants against Sokol would be counterproductive.

Now I often own shares before I write about them in this blog. I mention that as a disclosure. I don’t need to, you know. We don’t have rules that require me to. I could be technically legally correct in not telling you I own shares, or even lying that I DON’T own the shares. I could be a sleazeball of that magnitude and be absolutely, completely, legally fine. But it stinks, no?

The point is – while legal, it was a sticky wicket to be on, in terms of perception.

Yes, I will get the standard ten people who stand up for Buffett and say boss do you know he donates all of his wealth, even though the place he donates to, Gates foundation, gives just 5% of the wealth it owns while investing the rest in companies that constantly kills the very people they’re trying to save. Or that he’s right because he’s Buffett and I’m not. But then, one acquires a certain thick hide when writing anyway.

Berkshire shares have fallen since, but I doubt that’ll stick. Barry Ritholtz has a different take – he suggests that Sokol was okay until BRK decided to buy Lubrizol – post that, he should have transferred them to BRK.