I got a couple of emails that asked me about the new phase of real estate offers that go something like this: 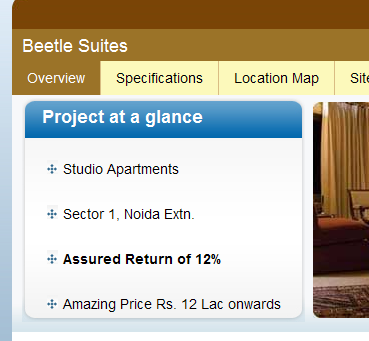 What’s this all about? A guarantee of a return?

It’s like this: The real estate developer can’t finish the project, and needs money. No bank is going to lend him any more money because honestly banks are up to *here* with their real estate exposure to developers and soon, unless the RBI extends the mark-to-make-believe that they started two years ago, all the banks are going to have seriously soiled diapers.

So, they can’t get money from banks. But they can borrow from you. At 12% the loan is ridiculously cheap, compared to even bank rates of 15%+. In the above image example, they expect you to pay the full money in 90 days, except the apartment will not even exist then. So you’re paying for, literally, thin air. And someone’s giving you 12% return for that. Sure, there’s an agreement and all, but when was the last time you enforced an agreement in India, huh?

You’ll bite, and hopefully, the builder will finish the apartment and give it to you. Or, you might be able to palm it off before that to another buyer who’s even more kicked about this project. You’ll end up making some money and feeling darn good about it, even if now, most of your gains are "black" and need to be put into another …hold your breath….property. This gets bigger and bigger and at some point it all goes *pop*. And that’s if it doesn’t go *pop* before you make any money. But don’t take my word for it, how would I know.

Second, notice the term "lease rent". It seems there is some sort of scam going on in Noida where property is not given to you freehold, but is leased out for 99 years. With the propensity of people to believe they actually own what they buy (what’s the world coming to, nowadays) this kind of deal should be carefully examined through multiple lawyers.

The "Take a loan, and builder will pay your EMI! Till possession" scam is a variant. Builders can’t get a loan. But *you* can. Meaning, *you* take the loan from the bank, and give the money to the builder . The bank has no problem funding you because you, sir, are a nice clean individual with other assets such as cars and perhaps children that banks can take hostage in case you show jitters in paying back. (I’m only kidding. They don’t necessarily take cars.)

(By the way, the real estate fellows only pay interest. They don’t pay back the principal. Fine print.)

The apartment is the collateral, but it is not yet built. Remember, the collateral, in India, is just one piece of the pie – should you default, and they can’t recover the entire money by selling the collateral, you will have to find the money elsewhere. Some people think that they can run away and the banks can’t find them. In a few years, after UID and all that, the banks *can*.

Sometimes banks are happy to loan you money, because they probably own the non existent apartment as collateral ANYWAY. Your taking the loan allows them to recover what they lent to the builder, plus it will cover a little more to actually build the place, hopefully, with the risk transferred to you, an individual. In RBI’s terms you, as an individual borrower, are a lower risk asset.

Your biggest problem is what happens if the builder doesn’t complete the project. UID or not, you won’t be able to get him to do anything, not unless you’re too rich to be reading this blog.

There are altogether too many builders using these schemes. One project in Bangalore offered a fancy car if you booked a project (you HAD to take a loan, of approximately 3.6 crores. The car was a gimmick 🙂 ). A friend tells me of a famous builder offering returns of greater than 24% a year, officially. Official web pages of properties state the return guarantee or EMI subvention gladly. There is way too much demand for money, and desperate folks make dangerous mistakes. If you’re considering buying now, and the "guaranteed return" seems attractive, consider yourself warned.