Please don’t consider this a big deal just yet. here’s the long term history of rates:

We have rates going up only to levels seen in June 2006. But, inflation was a lot more controlled then, and we have had very heavy inflation since 2009 now. There is a LOT of room for increasing rates.

Strangely, June 2006 was the bottom of the post-RPL-listing crash, which many of you won’t even remember, but the Nifty had fallen about 30% in two months since the big IPO of Reliance Petroleum Limited, which has since been merged with RIL.

The subsequent rally took the Nifty up about 150% over the next year and a half. 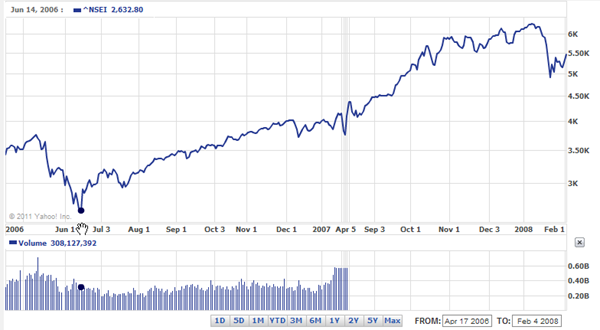 But would you bet on that today? There was cheap money then worldwide, there is cheap money now. We’ve just come off a recent high. The differences are that the world economy is a lot more shaky, and that inflation is very high.

The conclusion, though, is that rates are not as high as they should be – I think we should be in the 8% range to make any impact.