The performance of IPOs in 2010-11 has been fairly pathetic, with the average return being -13% on the NSE. Removing BSE only stocks, I’ve charted a list of IPOs that happened this year, with their returns till last friday. 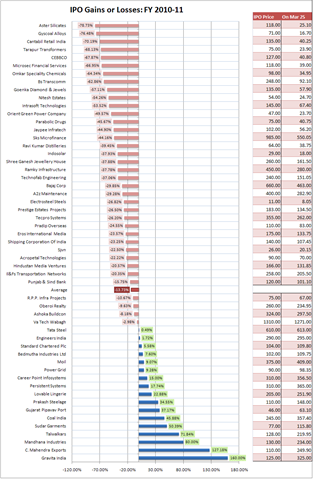 (Click to see a huge picture) Notably, a government IPO – Coal India – has seen a 46% return on the back of rising coal prices. Gujarat Pipavav Port is still positive, while the smaller and popular IPOs of Lovable Lingerie, Persistent Infosystems and Career Point should help entrepreneurs that are actually making decent profits think of an IPO.

The worst performing IPO, Aster Silicates, went all the way to 250+ before crashing, in just a few days to end up 78% in the red. To the people who wanted to ride it up after listing, the return is even worse.

Of the losers, too many of them are shady small cap stocks that shouldn’t deserve a mention. Of the notable non-shady stocks (or at least, people that have fancy degrees and wear ties) SKS Microfinance is in bad shape with a 44% negative return, most of which happened because of the AP government rules that took the carpet from under them.

Infra and power players like Nitesh Estates, Prestige Estates, Indosolar and SJVN fell more than 20% from the IPO prices.

As a follower but not a buyer of IPOs, I’ve seen that some stocks – notably those like Bedmutha Industries – are heavily manipulated. With huge volumes (over 50 cr. sometimes) and low delivery volumes, there seems to be a lot of circular trading or activity that smacks of promoter blessings. While there have been some investigations in the IPO process, we haven’t seen any really strong effort to figure out how stocks are manipulated immediately after the IPO. With little history, it’s difficult to trade them technically, and with little trader interest and low institutional support, such stocks can be easily moved around and rumours like "buy now before the juicy news comes" floated. But markets are markets, and money brings with it great incentives. All I can say is – if you trade them stick with a strong stop loss and expect that you’ll get on the bad side of some manipulation.

Livemint’s article prompted this post – because I wanted to see how they’ve all performed together. Overall, IPO investing has sucked unless you were a) selective and b) lucky.

I haven’t included last year’s IPOs (before 2004 April), but some of them have had horrible returns. NHPC sold at 36, and is below 24 after more than a year, a loss of 33% or more. NTPC is still below its IPO price of 201 (or lower if you were retail) last year.

Note: I’ve done my best to see if there were any bonuses or splits. Any data issues are mine alone, and regretted. Do let me know, though.