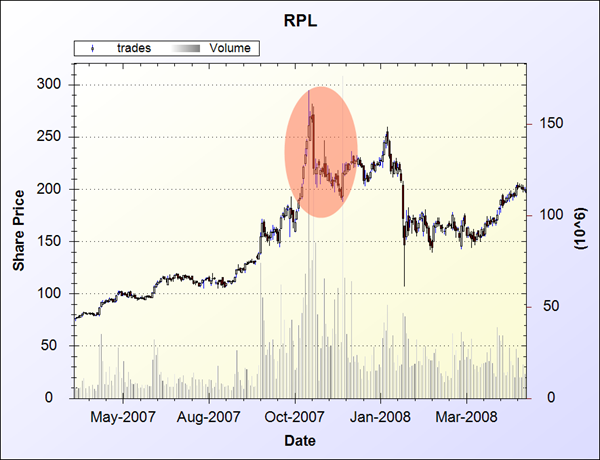 But SEBI has now raised doubts about that November sale by RIL. Because of a futures deal:

RIL had sold 4.1 per cent equity in RPL in the open market in November 2007. However, to ensure the transaction did not hurt market sentiment, RIL first sold RPL in the futures and then the spot market while covering the shares sold in futures.

During the process, RIL generated revenues (sale consideration) of Rs 4,023 crore and its profit from the transaction in the futures segment was estimated at around Rs 500 crore.

Sebi had said that since the company was aware of the sale of equity and sold futures prior to that, it amounted to insider trading. However, the company has maintained that all rules and regulations have been complied with. RIL had also said that its action was driven by “protection” of market sentiment and that the gain was recorded in the company’s balance sheet.

Sebi’s stand was that if the sale in futures was to protect market sentiment and not to earn profit, the unintended gain should be deposited with Sebi as a settlement amount. RIL, however, is said to have offered a much lower amount. There have been offers and counter offers, but consent could not be reached.

What If RIL had lost money because of the large impact cost of its selling RPL shares? In the horrendously unethical world of Indian broking, any attempt to sell shares by RIL would have resulted in brokers front-running and shorting the stock or the future. (SEBI has taken little or no action in such cases, even when it is blatant, and even FIIs know it happens)

A large one time order would have absolutely destroyed the stock – 4,000 crore in one trade? Not happening.

If they split the trade into multiple days, then it would get reported as a bulk/block deal and the world would know and beat up the RPL share.

The futures trade was really the only way to protect the price. This is not rocket science. If I held a ton of shares of a company I want to exit, I’ll use the "sell-future-first" policy. FIIs do this all the time. Domestic mutual funds make a few people rich while doing this. (Let’s just say fund manager X wants to sell some stock. If someone, let’s call him Mr. Broker, knows about the trade, a good amount of money can be made by shorting the future first. Enough said.)

But there are nuances. First, SEBI says there is "unintended gain". Perhaps they figured that out by seeing the actual impact cost of selling the shares versus the gain in the futures. RIL could have covered the futures at a much lower cost than they did – for instance, if they held on to the future short when the share sale was done announced, the market took the price down much further, and they benefited. So even if they allowed the futures transaction, SEBI could say there were extra profits from the announcement, so give that back.

Why is this illegal? Because RIL is an "insider" when it comes to RPL. In other stocks – where FIIs aren’t "insiders" – stocks are sold and futures are shorted exactly like this, and profits are made, and perhaps even legally.

Technically SEBI has a case because insider information is any information that can materially impact the stock price. For instance if RIL had sold the stock when it knew, say, that a part of the refinery was going to fail, that would amount to insider trading – I think most people understand that. But if I’m an insider, and I’m selling some stock, does the knowledge that I’m selling the stock constitute insider information? The lines are murky.

This case is interesting from many perspectives, especially political. With MDA’s powerful reach within the government, this case is still being allowed on – this could signal a stance I haven’t seen associated with a government under the Congress in a very long time.

Disclosure: I sold RPL just around the same time RIL was selling it, coincidentally. I’m still long some RIL, both through direct ownership and mutual funds.