LIC’s BIMA Accounts: Can you do better yourself?

LIC has a new advertisement going on, for its BIMA accounts, where it’s highlighted that you get a guaranteed return of 6%. Let’s dissect the claims and see if this product is worth investing in.

Before I proceed, let me ask you to read a great review of the product by Manish Chauhan over at JagoInvestor. The product consists of two types of accounts, one that limits your premium to 14,000 per year (Account 1)and the other, for higher (Account 2). A quick feature list: 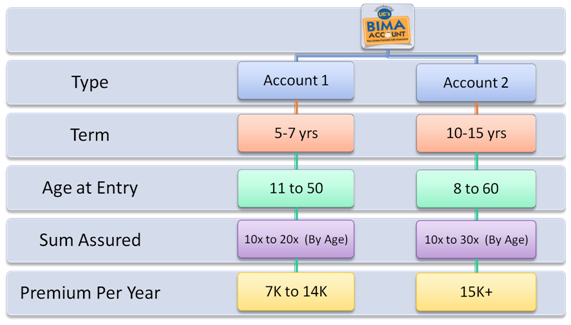 The selling point is a “guaranteed 6% return” but that return is only after the charges are deducted.

That sucks, because the charges are so high. In effect, the return is a measly 4.22% annualized return; but let’s see if you can do better yourself.

Let’s take a term plan plus a simple debt fund (long term). Assume the same return on invested funds – 6% (after all charges have been removed)

So the cash flows are here:

What I heard on Thursday was stunning. Anil Ambani was going to be implicated in the 3G Scam. He would be arrested. He’s in serious trouble because the ICAI was probing accounts. And then, the stocks were taking. RCOM, RPOWER, RELCAPITAL and RELINFRA – the stocks he owns, were down between 5 and 20%. RCOM went down below 100, and despite the late friday recovery closed at 97 for the week.

These were all rumours. And markets took them seriously; or at least, there wasn’t any further news on Thursday, so I’m assuming they were false. RELINFRA confirmed that ICAI had asked for something, but it wasn’t serious. They’ve complained to SEBI and it seems have found out who the brokers were that were circulating the rumours. Now it is entirely possible that brokers tried to benefit from the uncertainty in the group – and the chota Ambani’s current state of affairs – to short the stock and benefit from a downmove. But, as long term players will know, the father Ambani had destroyed a number of brokers of a "bear cartel" in the early 80s by buying up as many shares as they were shorting, demanding full settlement instead of badla and ruining them as they struggled to buy back shares in the open market. The BSE was shut for a few days to sort this out.

(Let me know if you want the story – it’s heart warming, although it got really tough for Ambani after that)