Crude oil is up more than 7 dollars at 94 dollars, a rise of 9%, which is HUGE. Libya is seeing huge unrest after Egypt’s revolution, and the Great Gaddafi is likely in some trouble after about 40 years at the helm. Bahrain, too, is seeing serious protests, and oil supply is under some threat, it seems. Or at least, the markets think so. 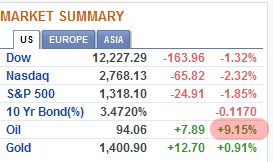 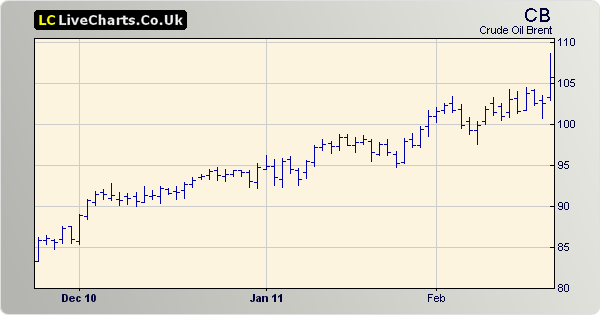 Can you imagine what this kind of spike will do to our inflation? Till now we worried about onion prices and milk. But at least we produce that. We don’t produce much oil (just about 25% of our usage). Importing oil at higher prices will either mean higher government subsidies or higher retail prices – both of which are bad. More importantly, if prices keep rising worldwide, it will precipitate a hoarding crisis by countries and citizens alike.

At this point, the risk is real. But it’s tiny. You have to consider that the world has enormous economic firepower against rising inflation, with interest rates being low. But rising rates almost surely are a negative for equities, and so is a rising crude price. Overall, if you’re an equity investor you have to hope that there isn’t too much damage now.

Stocks: Crude rises hurt BPCL and HPCL. Since crude price rises are immediately passed on to ATF, Kingfisher Airways and Jet will be hurt. The auto majors – Tata Motors, M&M, Maruti – will hurt as well (and the budget doesn’t look like it’ll be kind on them). FMCG hurts as well – even soap takes some of the oil refining process output! Indirectly, banks are hit – rising interest rates aren’t good for them.