I wonder why I get all worked up when I see utterly bizarre Sensex EPS estimates. Basically, the modus operandi seems to be:

In the Sensational Sensex EPS Story, in July 2008, I noted that projections of the Sensex EPS between Feb and March 2008, for the EPS ending March 2009 (note: nearly two years ago) was 1000. Four big name fellows said so. Where were we at the end of March 2009?

750. The Sensex EPS was Seven hundred and fifty. A full 25% below what they thought just one year earlier.

Folks, help me get this right. This is the Sensex EPS chart. Obtained by traipsing into the BSE web site and plotting data on excel. 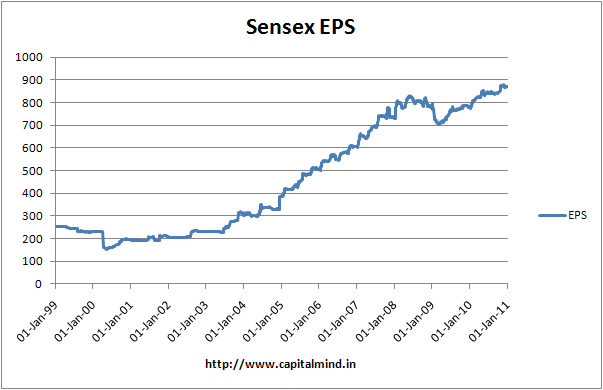 Okay, looks like it’s going up, but at the current rate it won’t hit 1,000 till – hold your breath – the September 2011 quarter (which will be visible by Dec 2011) . And currently we have only earnings till September 2010 (two quarters of this fiscal remain to be announced).

The current Sensex EPS is around 871.

To get to 1,300, we have to increase earnings by nearly 50%, in six quarters. That is faster than any other six quarter gain in the last 10 years of the sensex, and comes in the face of very high inflation (profits are bound to drop on soaring input costs), and high interest rates. HOW? I mean are we going to be that rocking? Heck, buy everything in sight dammit!

Everyone talks as if it’s all right – oh, we’ll so about 20% in the next two quarters, then about 25% in the year after that, so we will be fine. WTF, I think – 20% in two quarters is 40% a year annualized, which is fairly out of the range of the very same people’s wildest estimates.

In any case, we’ll have to wait and see who’s right. I’m all nice with hunky-dory estimates, but currently the wet-finger-in-air approach seems to be taking center stage. What this does is that it creates an element of complacency, that’s all.

Anyway. The bigger problem – and one I noticed on a whim when I plotted it, was the dividend yield: 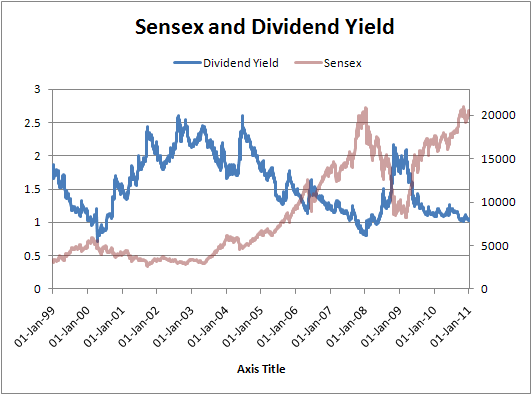 The current deviation is large, and we can do one of two things – dramatically improve profits and dividends, or have a dramatically drop in the Sensex to push the ratio back towards the mean. Take your pick, or tell me your alternative theory. I won’t hold you to your predictions, as long as you don’t hold me to mine.