Auditors have made three notes to the results.

The auditors have stated:

The Statutory Auditors have qualified their report on standalone accounts in respect of (i) remuneration paid to the Managing Director, being in excess of the limits prescribed in Schedule XIII of the Companies Act, 1956, … Management Response: (i) The Company has filed an application with the Central Government in December 2009 for seeking necessary approval and the same is awaited. …

Raghav Bahl gets a salary of 1.09 cr. according to the last annual report. That isn’t really much, but obviously too much for a loss making company. Yet, it’s strange that it’s nearly a year since permission was requested and it hasn’t been granted.

In 2009, they actually conducted a postal ballot for the “waiver of recover of excess remuneration paid to Mr. Raghav Bahl”. And it went through.

TIFC and FIML results not disclosed

The Statutory Auditors have qualified their report on consolidated accounts in respect of non consolidation of financials of The Indian Film Company Limited (TIFC) and Film Investment Managers (Mauritius) Limited (FIML). Management Response: The Management is of the view that since investments in TIFC and FIML are in the process of being disposed (see note 8(a) above) such consolidation is not required.

Strange that they are allowed to do this – how can they not consolidate results, EVEN if there is a sale waiting to happen? The auditors have (naturally) complained about this – it doesn’t make any sense.

More importantly, Viacom18 will continue to be 50% owned by Network18, even after the new restructuring, or so it seems. So they can run, but not hide – eventually all of it will have to be accounted for.

Network18 will make a profit on the trade – since they bought at around 40p per share  and are selling at 115p. Yet, is it a profit if you sell to yourself? (The market price was around 37.5p) According to the PR, the cash inflow into Network18 is 350 cr. from the sale.

No losses shown for fall in prices of owned shares

Network18 owns shares in public entities, like IBN18 and TV18, and in a slew of unlisted companies. These shares seem to have lost a lot of value, but Network18 is unwilling to take the loss. Their stance:

The Statutory Auditors have qualified their report on standalone accounts in respect of … (ii) non provision of other than temporary dimunition in the value of long term investments/advances of 39,562.51 lakhs. Management Response: ..(ii) No provision is necessary keeping in view the long term involvement of the company with the investee companies and in view of the proposed reorganization referred to in 3 above.

The auditors seem to think the total amount is higher. In their assessment, they mention that the “goodwill” amount of 1255 crores has a part that is invested in other group companies, whose net worth is eroded, but the goodwill amount has not been taken down. Investments of 733 crores are in downline joint ventures whose net worth has been “substantially eroded”, but there is no impairment taken. We don’t know how much the actual impairment will eventually be, of course but the amounts are fairly large.

(Personally, I think they might eventually stuff all the loss into one quarter, and hope that we won’t notice).

While this sounds shady, it’s par for the course in India where many companies simply refuse to bother about strange things like accounting standards. But since the investor community seems to consist of people who don’t give a rat’s ass, their share continues to maintain its price. But eventually, the cookie will crumble. 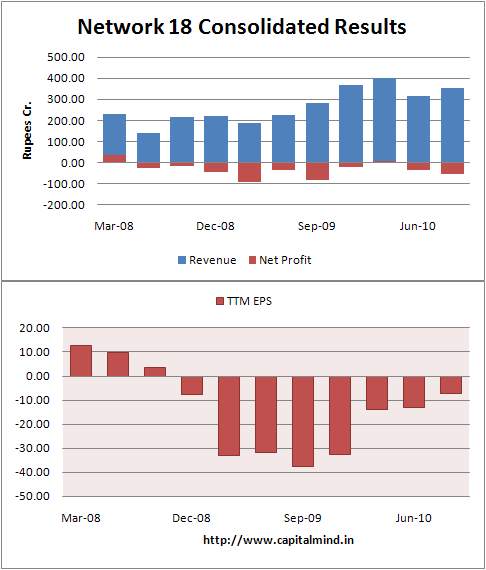 The improvement this quarter seems to be on the back of ignoring financial accounting requirements to an extent. But how much, we’ll never know. 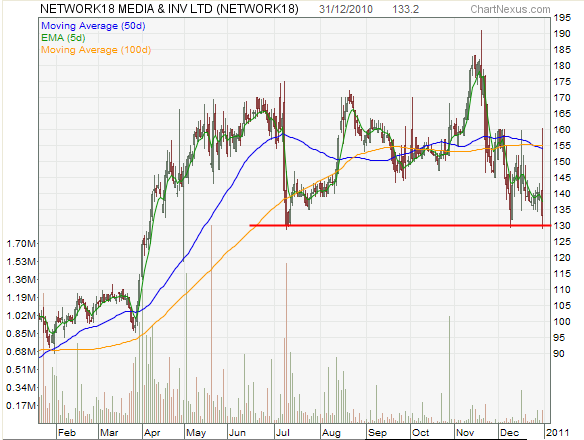 There’s a lower support of 130 but as you can see, the volumes have dried up and the stock’s looking to go below. It has fallen substantially from the highs of 500+ in Jan 2007. For those investors, it has not been a fun ride. TV18 is quoting at 71, lower than the rights issue last year, and IBN18 at 89, again lower than the rights issue earlier this year. It’s a sad story for investors, honestly. The footnotes make it worse.