Jayant Pai at PPFAS talks about how markets react wildly to news:

A friend of mine who is a newly converted equity investor was rather perplexed with regard to two developments recently. The Infosys stock fell 5% on the day despite announcing a Year-On-Year (Y-o-Y) net profit growth of 14% (a very decent number, considering its huge size) while the Nifty rose by nearly 2% on a day when the Index of Industrial Production (IIP) data for November 2010 showed a Y-o-Y growth of merely 2.7%. According to him, the opposite should have happened in both the cases. Although short term market moves may happen for apparently no particular reason, one explanation for this may be that it things were already “priced in”. This is jargon for saying that the stock/index had already moved in a particular manner PRIOR to the news.

For good news, you would always "Buy the Rumour and Sell the News". Infy’s stock has seen a meteoric rise in the last six months, compared even to the rest of the pack. 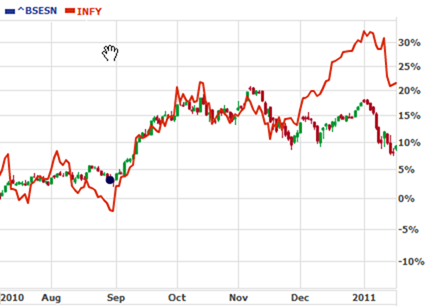 (Note: Have used "INFY" rather than the Indian listed stock – Yahoo didn’t have historical data for it when I charted)

The fall of 5%, which took the relative valuation down only a small notch, shows you how much more Infy has been valued recently. It has indeed been buy the rumour – the rumour in December that Infy would blowout earnings. Unfortunately they just don’t seem to have it in them anymore. I recently talked about size – that Infy’s too big to show massive growth – but that doesn’t seem to apply to a behemoth like TCS, which did 30% EPS growth on a revenue that’s even higher than Infy’s. Either ways, the problem isn’t Infy’s performance. It is that they can’t be given these valuations anymore. But I agree with Jayant that the one day blip is just noise; Infy has shown great price performance in the long term regardless of the corresponding lack of fundamentals.

And the IIP day was incredible; stocks fell like crazy immediately after the IIP announcement and then rose later. Importantly, stocks had been falling earlier anyhow; and IIP is full of noise. The dear folks at cycle.in have a seasonally adjusted chart for IIP: 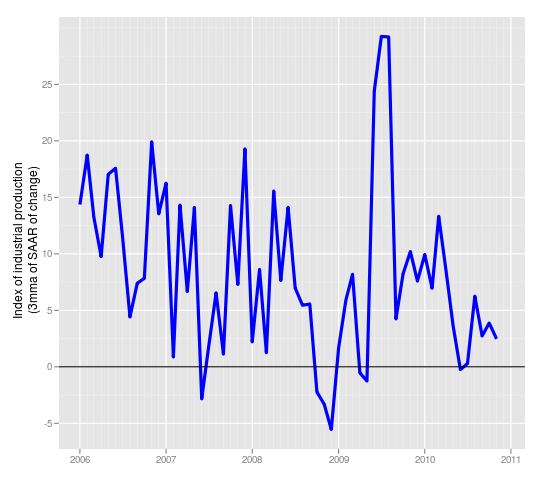 The latest news is just a continuation of slowing growth, it seems. But there is altogether too much noise in this data; I would even ignore the seasonal adjustments, because it will all get revised and nothing stays valid.

This was a "sell the news…oh wait, this is bullshit news" kind of reaction in the market, really. But all this is so nice to discuss after the fact. We are so shallow that even if one big pension fund in the US had decided to up allocation by say 1% to India, we would have gone up; and we attribute market move to things like IIP instead. The devil is always in the hidden details.