In the MarketVision Newsletter #1 I mentioned the Baltic Dry Index, and that it may be a concern as the rate was the lowest in nearly two years.

Calculated Risk pooh poohs that idea. The fall is explained by more ships being built, and the current fall may be because of the floods in Queensland being empty as there’s too much flooding to be able to put ore on board.

That might be true. The index rose from a bottom in 2009 to fairly large values in 2010 (on a percentage basis, it went up more than 100%) and then has had a squiggly move. 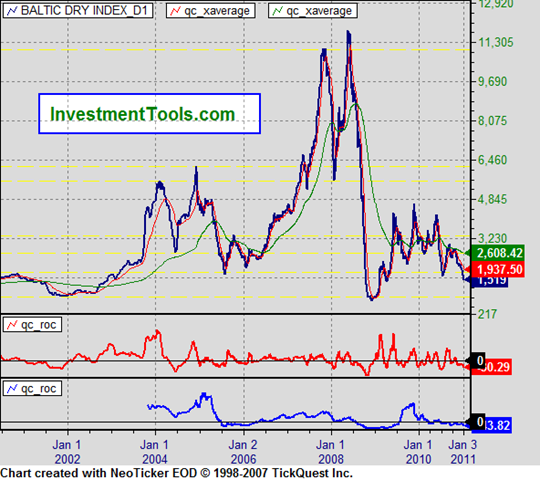 BusinessWeek also says the Australian floods and the ship supply has cratered rates.

“News of the Australian flood has had a catastrophic downdraft,” Alex Gray, London-based chief executive officer at Clarkson Securities Ltd., said by phone today. “We’re lucky getting to the end of the week still above $12,000,” he said, referring to capesize rates.

Capesizes are the largest vessels tracked by the Baltic Dry Index, a gauge of commodity-shipping costs. Today the index retreated for an 18th day, losing 25 points, or 1.6 percent, to 1,519, the lowest level since April 14, 2009. It slid 14 percent for the week, the most since last July.

Of course Indian stocks have been hammered so you can’t look at shippers independently in an easy way, but you have to watch Varun Shipping, SCI and Mercator Lines. The problem: regardless of the BDI, lower shipping rates are bad for shippers.

The Harpex, an index more likely to be useful in terms of trade (it measures container ship data, not just raw ore carriers as the BDI does). 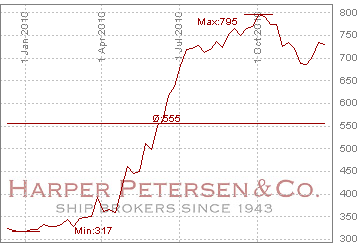 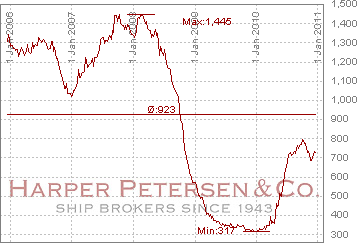 There has been some dip recently, but not enough to warrant attention.

I concede the point though – the drop in the BDI isn’t cause for concern that world trade is dropping.