A small story at Yahoo on the choice: Ulips or Mutual Funds.

Ganesh Raghupathi sighed. He had known Arnold would be late. But then, Arnold had two kids, and you always give that species a little more respect, and a little more time.

Arnold D’Souza was looking forward to the meeting. He walked in to the coffee shop, while Ganesh was clumsily switching on his laptop.

“Hi Guns!”, said Arnold. “Happy New Year! Let’s get started. To recap – it’s the 1st of January, 2011 and we are here to compare our retirement choices. I chose a Unit Linked Insurance Plan (ULIP) and you bought something else. Let’s see where we are today.”

“Thanks for the wishes, Arnie, and the same to you.”, said Ganesh. “Let’s see the chart:”

“Let us now compare. Now only with current values of our investment, like we had discussed; let’s dissect and see how each investment has done in different areas..”

Arnold gasped. “Whoa. I paid more in the initial years? That means less of my money compounded itself, and thus would have destroyed my return. Okay, my fund had better have given stellar performance!”

“Look at the NAV comparison in this chart I plotted, mapping both funds together. “

“Purely from an NAV perspective, the mutual fund has done better, with a 35% annualized return, versus 22% for the ULIP”.

“What does that mean, Guns?”

“Well, remember our conversation at that time? That insurance advisor told us that even though the ULIP was a high-cost product, it would do so much better in terms of performance because it was a new fund. The mutual fund I chose was one of the best at that time; it is no longer among the top 10, but it still has beaten the ULIP comprehensively. In the performance area, the fund has returned 15x, while the ULIP, only 6x.”

Arnold whistled. “Wow. Okay, that’s another piece for you. What about insurance?”

“For me, as an investor in a mutual fund, I could not replicate that structure at all, with a reducing cover. And no one would sell me a term plan for 5 lakhs – the premium was too little. The best I got was an offer of Rs. 3,000 for a 10 lakh insurance. It was higher insurance, but it was constant – that means if I died my family would get 10 lakhs PLUS the value of the fund, but in your case it would be only the higher of 5 lakhs or the fund value. Even then, what it means now is that I paid about 27,000 as insurance; you probably paid less than 4,000”.

Arnold half-smiled. “Okay, but the two aren’t necessarily comparable. You had a higher cover, but I admit that the insurance cover was hardly useful to either of us. I mean, if we could put in 50,000 per year, a cover of 5 lakhs was woefully inadequate. Let’s leave those alone. What about taxes, Guns?”

Ganesh replied, “Yeah, that’s where the ULIP scores. My tax saving, at about 30% a year, purely on this product was Rs. 1,000 per year for the term insurance. For you with the ULIP it was Rs. 15,000 per year. The difference, if invested back into the ULIP, would have bumped your returns to much higher levels. But again, we have a problem with reality.”

“Darn. Just when I was showing signs of winning. What reality?”

“The fact that our tax saving potential has been capped under a collective investment limit. See, we both started to get bigger salaries, Arnie. Today about Rs. 8,000 per month for each of us goes to our provident fund account, which takes up most of our tax-saving limits. If you ignore that, your housing loan principal repayment will take it. Or, your children’s school fees. Or the principal repayment on my housing loan. Or, like we mentioned, our insurance was inadequate, so we took on much larger term policies – even that premium may be used under the same tax saving limit, currently of Rs. 1 lakh per year. Effectively, the ULIP didn’t help with saving taxes – reality bites.”

“Guns, you’re right. My accountant laughed when I asked him for tax-saving schemes. I already had too much in them, and the new Direct Tax Code might make the tax angle redundant, he said. There may be no tax saving for insurance schemes like mine, and worse, the maturity proceeds may be taxable!”

Arnold let the information sink in. “Look, Guns, it’s not about rupee amounts – in those terms, the Equity mutual fund approach has done far better. In fact, just a rough comparison of the two using their real NAVs shows that one approach has been vastly superior.” 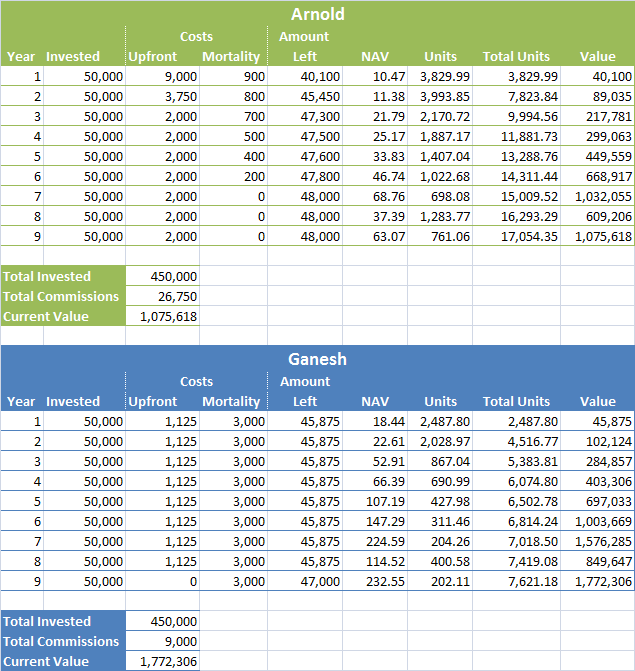 “It’s the Term Plan + Mutual Fund, without doubt. Not only did it have far lower costs – it has provided a far better return. In terms of saving tax, the ULIP might have done me some good initially, but other avenues took over my tax-saving limits, and there was no real tax-saving eventually. Both our approaches were inadequate for insurance. You win – here’s your one rupee.”

Ganesh took the coin and nodded. “But, what happens, going forward”, he asked. “If you had to decide on a retirement strategy today, what kind of product would you invest in?”

1) I won’t bother about tax saving. So much has changed since I bought a product 9 years ago, and so much more will change going forward, all towards taxing of potential gains. The only thing I care about is that I mustn’t be taxed while “accumulating” my growth – only when I exit. In that regard, fixed deposits are out.

2) Costs matter. The more you pay for a product, the more it hurts you later. In fact, a product that costs higher in the initial days seems to destroy your compounding potential.

3) Performance matters. While I might have chosen a badly performing fund and you a great one, in the end the fund that does better will win. But fund performance cannot be taken for granted or assumed, the only thing you must have is the ability to shift out of a badly performing product. With a ULIP you really don’t have that freedom – you can’t just shift to another ULIP without paying huge upfront costs.

4) Don’t mix insurance and investment. The advantage of “insurance” was cursory – it was terribly inadequate with the ULIP in any case.

In that context, I wouldn’t go with any of the ULIPs they have to offer today either – even though some of them offer lower upfront costs, they are not low enough. I might choose a long term strategy of allocating money to different kinds of assets – debt, gold, real estate and stocks, and to get there, I am likely to choose either a mutual fund or go direct. There’s also the New Pension Scheme (NPS) which has even lower costs, though I don’t like the fact that they force you to buy an annuity at the end. There are Exchange Traded Funds that have even lower costs. For insurance, a term plan works best, and it seems like the insurers are reducing costs every month!”

It was now Arnold’s turn to sigh. “I had put aside the one rupee coin a few years ago, Guns. And the strangest thing is – I made a substantially higher return from stock options in a startup that was just acquired. That takes care of my retirement, but wouldn’t it be crazy to discuss that as a retirement strategy?”