Promoter of UFlex Limited, Ashok Chaturvedi was sentenced to four years in prison by a special CBI court, in a case of bungled land allotment in Noida. Former UP chief secretary Neera Yadav was also sentenced similarly.

UFlex is a packaging company and has recently benefited from the massive upsurge in polyester film prices, taking their profits up to 202 cr. in the Sep quarter, and 263 cr. for the half year. With the diluted EPS at Rs. 37 for the half year, they even projected an 800 cr. profit figure for the full year. (Click here for a multi-page TIF press release) 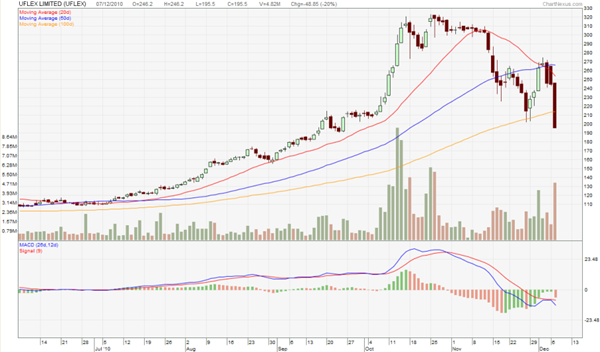 The stock doubled since July, from a price of around 150 to the highs around 320 in October. Even at 320 and a projected Rs. 55 EPS, we’re talking about a P/E of just 6, a reasonable amount one would think.

But PET film prices aren’t going to stay this high for long – Prices went up to Rs. 230 per kg. but a lot of that has been because of strikes or shut downs at European Giant plants (LyondellBasell, Ineos and Total). Also, many plants had seasonal holidays when demand perked up all of a sudden.

If you think this is esoteric and are thinking of eating chips instead, the packet of chips you just bought is packaged with PET film. As are gutkha and pan masala packets and a ton of other stuff that’s covered in “shiny plastic”. Now PET is flexible, and has had great price stability – it’s input is linked to crude prices that have stayed stable. Yet, PET is replaceable by the slightly more unwieldy BoPP so prices have a cap, and the shortage of PET worldwide took prices up to a point when moving to other packaging solutions turned out to be efficient.

Back to UFlex. Now, promoters have given themselves warrants for 1.35 crore shares, at a price point of Rs. 300. One of them, Anant Overseas, just converted 35 lakh of these into shares – and that means paying up 100 crores. For the remaining 1 crore shares, the promoters have paid 25% upfront, which is 75 crores.

So the share, on the above news, fell 20% – down to 195. Attractive? Perhaps. The company does have decent production facilities and may not be quite that dependant on the promoters. But there are downsides.

You can’t write off the promoter impact. While they are pumping in money into the company, the promoters have pledged nearly 70% of their holding, and a steep fall can trigger margin calls quite easily, leading to panic sales.

In a stock group I follow, certain members say PET film prices have fallen a lot – down to 180 per kg. While that may not be really bad, the real issue is that customers aren’t really ordering – for one, a move to alternatives like BoPP are not easily reversible (and PET needs to get really attractive for the switch back), and for another the big packaging seasons may be over (Diwali in India, Christmas packing for the US). Additionally, falling prices need to find a floor before buying happens, because people tend to wait.

Lastly, and importantly, the Supreme Court has banned the use of plastic pouches for gutkha and pan masala, from April 2011. This is good for society – they should ban gutkha and cigarettes altogether, honestly. But it destructive for the plastics companies like UFlex. Two other Polyfilm manufacturers (Jindal Polyfilms and Polyplex) have also shown signs of peaking and retracing. 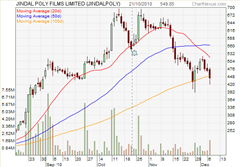 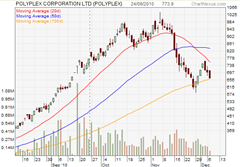 Disclosure: I’ve profited from the run up in these stocks on the ultra short-term (less than three months) but those have been interesting technical moves. Thank FSM for stop losses – took me out once near the 300 levels and once more at 257 last week (entries were at 147 and 230). Right now, no positions. I’m not even thinking of investing – that will probably wait till the highs are broken again.

I think you could analyze these stocks to death, but it was panic buying and panic selling – and the only way to take advantage of that (in the short term) is through price pattern analysis. Fundamentals have never been better, before yesterday’s promoter conviction that is.