The Statutory Liquidity Ratio (SLR) is down to 24% (down 1%). There’s also a relaxation of another 1% of assets under a temporary liquidity facility until Jan 28, 2011. 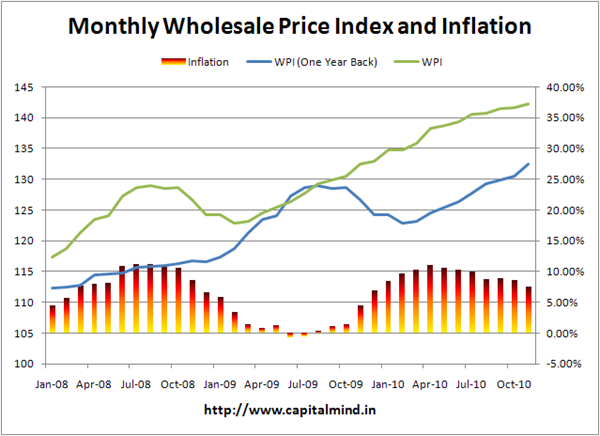 Yes, WPI inflation is moderating. I think past revisions make the data unreliable. Still, all things remaining as they are, we should moderate – the high base and the crop availability will cut prices down. But, things never stay as they are, no?

And for Primary Articles, we have: 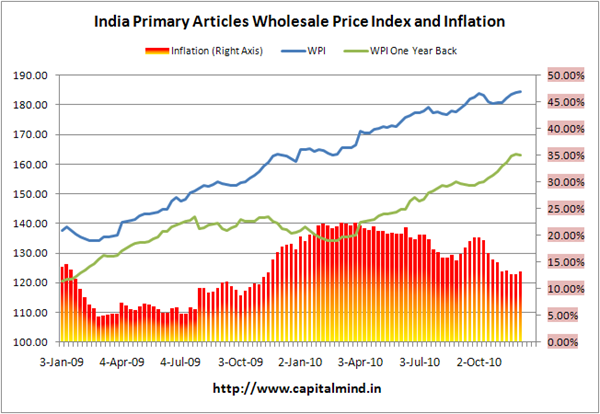 Again, another upward revision in past data, takes inflation for week of 9-Oct to 19.03% up from the 18.05% reported. Note the uptick this last week – revisions two months later will tell us where we really are.

Oh and petrol prices are up, but diesel is not. It won’t hit inflation much – because it’s just 1.09% of WPI. But it affects you and me a lot more. That’s how distanced the index is from the real world!

Since short term money is hard to come by and banks are being absolute *****s about raising their retail deposit rates, the solution seems to be to infuse liquidity through bond repurchases by the RBI, upto 48,000 crore in the next month. Now I like this concept – i.e. I think instead of holding foreign exchange reserves, the RBI is better served holding Indian government bonds instead. But it is only an unintended consequence – banks need to immediately raise short term retail deposit rates (like 3 or 6 month deposits) to the levels of 8-9% as a temporary measure, until they sort things out. They’ll suddenly find ample liquidity.