Moneylife provides for really interesting reading, and their latest is an article asking if demand for power is slipping sooner than expected.

Research reports have suggested that there could be a fall in power demand, resulting in a surplus power scenario in India in a few years from now. But is this happening sooner than expected?

Overall power generation in November this year was up by 5% year-on-year to 62.5 billion units, but month-on-month generation fell sharply by 11% on account of a fall in demand, according to the latest data from the Central Electricity Authority (CEA).

Now that isn’t altogether correct, because

a) demand always falls in November

b) It rose much higher in October as well.

From the CEA Nov Data, there is this graph: 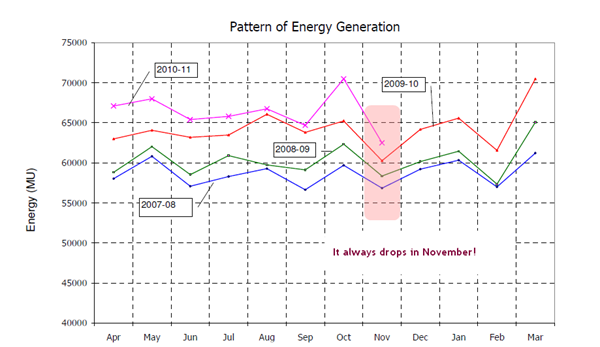 So that’s out. But this:

As per the data for November 2010, peak deficit fell from 12% in November 2009 to 9% in November this year, helped by capacity additions over the past year. Overall energy needs grew only marginally-by 0.7% on a year-on-year basis-even while peak demand increase by 4%.

This seems to be true – the peak deficit was around 15% three years ago, and is now just 9%.

While demand tends to drop in November, and so does supply, the power sector may be in for oversupply, even if it’s temporary. It’s a pet theme for me that the power producers will become commodities, and will have to go down from their current P/Es of 20+, to perhaps less than 10. (Read Excess Power – the next boom, after five years?)

Are we there yet? The data needs to be looked at closely but at this point it could simply be the tight liquidity policy at the RBI, an unusually cold winter and the seasonality of demand. Larger numbers today cut out the low base impact of earlier years down. And a lot of power projects have started to come online, with companies like Power Trading Corp and Powergrid coming along to manage supply over the country.

This isn’t about shorting the power space, but a recalibration of their business model. We might do better to focus on stocks that demand electricity – like aircons, home equipment, heating/geysers and so on. The surplus power situation would be awesome, except it doesn’t feel anywhere close to that, in Gurgaon.

Would love to hear your thoughts.