(Thanks to @Work_ant for mentioning this) 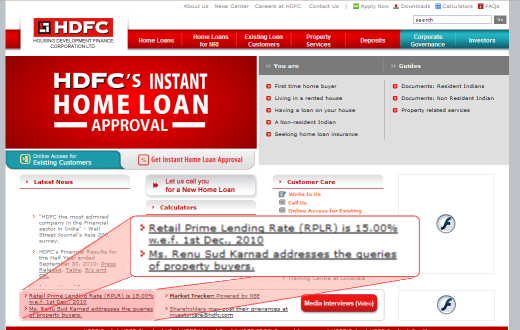 That means if interest rates stay where they are, home loan buyers will end up paying 10% on their home loans post 2012, and further increases till then will hurt them more.

But if the rate went up to 12% effective (RPLR went to 17%, say) – the EMI will be 54,500, which is 125% of the current payment. Given that there is no restriction on RPLR – HDFC can set what it wants – there is no reason to assume that rates will remain in sane boundaries. As RBI raises rates, money gets scarce, and the cost of borrowing of an NBFC like HDFC goes up, and they will raise rates accordingly.

You want to know how expensive money is? RBI conducted an auction today for T-Bills – the safest form of debt, since it’s government guaranteed. The 91 day T-Bill sold for 6.94% and the 364 day for 7.27% (all annualized, btw). That’s what the government will pay to borrow, for less than a year. And the 10 year T-Bond rate is 8.11%, and the 30 year, 8.43%. With the spread that small, we’re speaking of a very flat yield curve, and the rule of thumb is that financial institutions make loads of money on a steep yield curve (they borrow short term and lend long term) but not so much when the curve is flat.

It seems 27% of HDFC’s loans are in the teaser rate scheme. That’s more than 25,000 cr.  – which means if interest rates stay high, the reset rates will hit these consumers hard.

Since they’ve stopped teaser loans, all new floaters will likely be at 10% or more. How much that will help offtake is something time will tell – but it is likely to hurt sales. Even then, I think the stopping of teaser loans is good – there is some level of systemic risk such loans introduce.

Disclosure: No holding in HDFC.