Last year, I did my annual Diwali predictions, and it’s time for the judgements. Let’s see:

Chinese real estate markets are going to tank. Sometime in the middle of 2010 perhaps, and coincide with a number of ARM resets in the US. This will somehow reveal why India and a lot of other countries are impacted by this, though no one has a clue just yet. I wish I could be specific, but I’m no soothsayer.

Wrong. While Chinese authorities will introduce a property tax next year, the party is still on and going strong. Price to rent ratio is 45.9 in Beijing! (Compared to around 30 in Gurgaon) It might be a bubble, but that doesn’t matter; bubbles can get bigger than you can remain logical. –1 for me there.

India’s going to have a real estate boom/bust cycle yet again. This is likely to be a really short one, largely because the last one didn’t get over properly. This time it’ll be the investors that hurt as much as the random retail buyer.

Well half of it was true – we got a boom. While I still think we’ll see a bust, it hasn’t happened. So no points. Read an excellent take on the current big-city situation by Moneylife.

But commercial RE? That will take a hit all over India. We’ll finally see some real estate moves into smaller towns, and the bigger towns will take a hit.

+1 – commercial RE has been taking a hit, with mall vacancy going to 30%. Lending to the CRE industry continues unabated, but that could be cheap money speaking. While malls are slowly seeing some action, the amount of ready-but-unoccupied commercial real estate has still been increasing. Smaller towns did see some major price rises commercially – though I know this only anecdotally.

Oil prices will slowly ease back after showing spiky behaviour. Some of this will be related to demand loosening, and yet others to regulation that disallows speculation in commodities.

Oil prices did ease off but didn’t really come down much – and stayed in a narrow range. While I have no real figures on demand, there’s been no adverse regulation in the year. 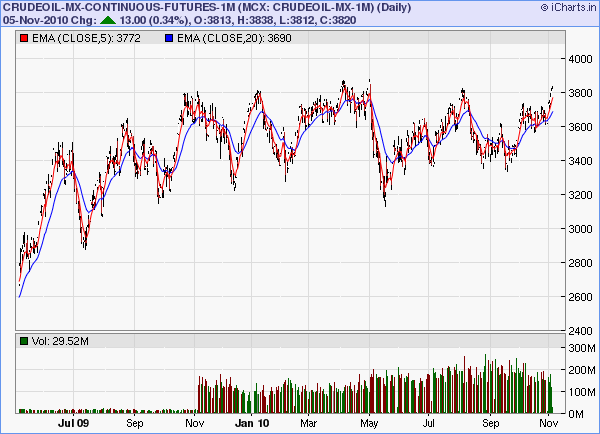 Gold will continue to hit all time highs; there is likely to be a 10-20% drop in the year though, but it will roll back up.

What can I say but whoopee! 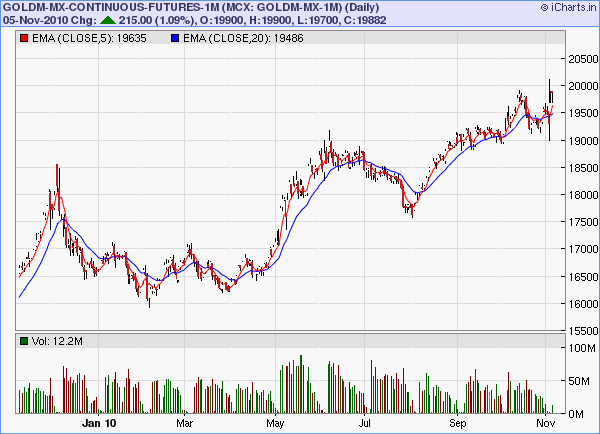 Equities will see a lot of interest from organized funds like pensions, insurance and other long term saving schemes. That will provide a floor around the 3000 levels on the Nifty. We won’t see a new all time high in the broad indices (I’m going out on a limb on this one) and we will see a 30%+ drop in the year.

Haha. So wrong it’s funny. We actually did see an all time high the day before Diwali! The max drop was about 12%. All the interest came from abroad (maybe pensions etc.) not local.

I will, as usual, attempt to do something more constructive in my life in terms of building a future for myself, giving more time to family, teaching my son to say "left" and "right" (instead of "yeft" and "yight" right now) and other items of similar importance, learning to write, taking a good long break, and finally, losing weight.

This is a +10,000. I did go through various things that helped me determine exactly where I want to be (by eliminating exactly where I didn’t want to be). Great time with family, watching Varun grow up and learn to say “Please”, “Sorry” and “Daddy, can you please buy me that airplane?”. Lost 4 kgs. Learnt to write, a little bit. Took a break.

It’s back to work for this year, as I start Marketvision, focussed on Online Financial Knowledge through videos. More details soon, but first, the yearly prediction situation:

Happy festivities folks. I write this a day late because Diwali this year involved too many firecrackers to think. Plus, family is top priority :)

Note: I hate to predict, but rather, work on the outcome instead. So her
e’s two picks I think will do well. Elecon Industries and Ashok Leyland, as second rung players in the power and road spaces, which I think will move up in valuation next year. I have positions of course – why would I describe their potential and not own them?