Foreign investors seem to have reduced their allocations to India in the last few days as they withdraw funds from the market. From June they’ve only been investing more into the market, and September’s seen massive inflows. The outflows are not much – just 3,500 crores this week.

In November the Nifty is down about 4% (From 6000 down to 5750) and FIIs still have a net positive investment of 4,400 crores for the month. The cumulatives (to smoothen out small issues) is positive at the 120 day level, but is starting to go down at the 20 day cumulative.

Historically this isn’t much of an indicator, except that: On nearly every intermediate dip in the last three-four years, we have seen the FII 20-day cumulative go below zero before a recovery happens. 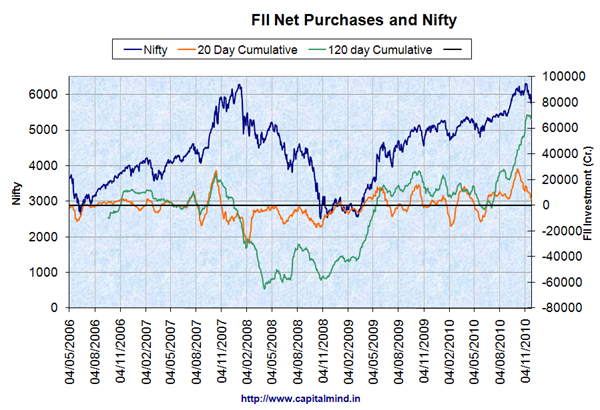 Domestic institutions are, as usual, on the other side. 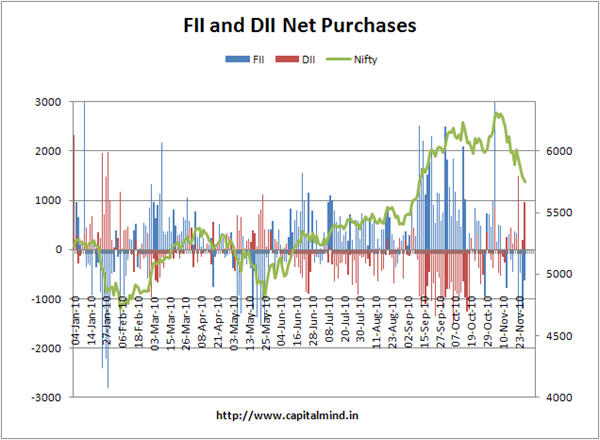 Continued FII negativity may be a result of the European Debt Crisis, but it will be quite negative for India because much of the recent move has been because of FII money coming in. Of course, a massive rescue attempt in Europe is a big positive for our markets. Combined with the QE2 in the US, that will be a huge impact. But there is one point at which no more rescues will be possible or palatable – you just don’t know when.