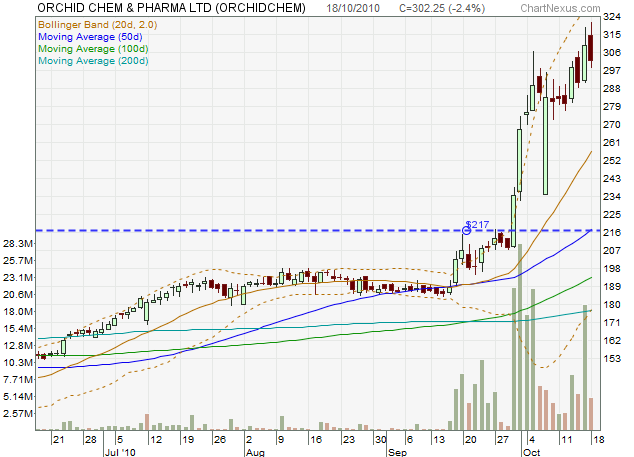 The breakout has been incredibly strong, and the stock is now closing in on the all-time high of 344 in April 2008. The drama then was spectacular, with a Ranbaxy promoter company, Solrex, buying a stake in it. The stock had just earlier fallen to 100 on news that Orchid promoters had to sell stock to cover margin calls.

Now, it seems to be going up on big volume, but something strange is happening. Insiders are selling, and selling like crazy. Solrex has sold it’s stake in September. There are rumours saying management is buying back stake from the Ranbaxy promoters – which could explain their selling, to raise cash. Promoters still own 25% of the company, and 4/5th of that is pledged.

From a P/E standpoint, the first quarter showed Rs. 2.4 EPS, so the P/E is quite high at 30+. They made a 38 EPS last year from a gain selling a unit, so I’m not sure how the growth will be.

Is there something happening here? Biocon just announced a deal with Pfizer and their stock zoomed up 12% to 455 today. But if something of that sort was going to happen, why would insiders sell?

Trading wise: it should target the earlier high but the supports are at 280, which is a wide stop loss, so if you’re getting in, use smaller positions.

Disclosure: Own both Orchid and Biocon for a while now.