On Oct 15th, the Andhra Pradesh Govt. issued an ordinance to rein in Micro Finance Institutions (MFIs) in the state, quoting their strong arm recovery methods. 30 people have committed suicide from the harrassment, according to official sources.

This ordinance was temporarily quashed by the High Court, which said the AP govt. gets two weeks to respond to the questions the MFIs raised. Still, the MFIs must register in a week, and adhere to the interest cap and the recovery boundaries prescribed in the ordinance.

It seems the MFIs are exposed in AP to 30% of their total portfolios of Rs. 30,000 cr., which is a pretty hefty amount. Plus, this could prompt action elsewhere.

Swaminathan Aiyer thinks this will only help moneylenders and SHGs. Importantly, he has invested in 3 MFIs. And his point isn’t entirely accurate – most moneylenders only do collateralized lending (against gold, house etc.) and the money’s usually used for wedding/illness/funeral/dowry – a realm that MFIs don’t even begin to address, because they only fund “income generation”.

Note: This is what they officially say. But because many borrowers need money for these purposes, they will disguise their needs by saying they’ll buy a cow or something, and use it to fund that wedding anyway, and it’s not like the MFIs don’t know about it. Just anecdotal evidence, and I don’t have any MFI investments, as a disclosure.

Aiyer’s other point that SHGs are government controlled and therefore the government’s ordinance is just protecting its own turf. That’s valid, but self help groups have been quite helpful in their own way, and there is a need to bring all such institutions under a common regulatory umbrella.

NDTV says borrowers in AP have simply stopped paying loans back. That’s a definite fallback – remember the loan waiver in 2008? Farmers that continued to pay back even after rumours that there would be a waiver, were rightfully pissed off; the waiver ended up being related to “overdue” amounts, which to a regularly paying farmer is a WTF. So obviously, no one will pay back loans if the rules aren’t clear and written in stone; it’s not the media, it’s the recent past, and the moral hazard of getting screwed if you did the right thing. Indeed, the “right” thing today is to not pay or threaten to not pay,which I think is beginning to apply to western sovereign debt today, but I digress.

SKS Microfinance has seen it’s shares go south in a bad sort of way. After the panic at firing their CEO Gurumani, this new crisis has hurt valuations some more. Despite some stellar financial results – they announced an EPS of Rs. 11 for Q2, Rs. 20 for the half year, which is great growth; the P/E is above 25 though. 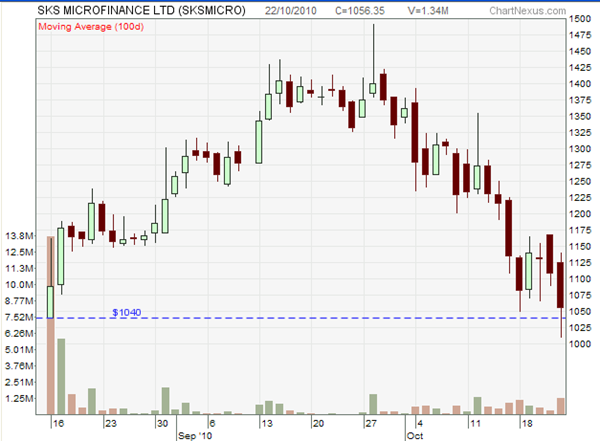 Just a little more to go to break the IPO price of Rs. 985 – but will it go down that low?

MFIs are needed, but the battle against them has turned political. Somehow, banks never got painted so badly even when they employed tough recovery methods; and in some cases, MFIs are actually much better than the alternatives of going to moneylenders. But since the game has become political, it’ll get far more dirty than the machinations of strong-arm recovery methods.