Moneylife is pissed with SEBI. I’m not in favour of their arguments; though some of them are forced through for no reason (such as KYC or KYD being made compulsory). Removal of entry load is awesome, as was the trail commission removal at the request of the investor. The point is: If we don’t do these things suddenly, people will not wake up and decide to pay the advisor separately. Imagine if doctors were getting paid by the medicine companies, and offered their services to you for free – would you go? Really? Yes, pharma companies pay docs even today; but that amount isn’t much compared to what they charge patients – and because they charge you, you don’t find them recommending Rs. 500 worth drugs every time you visit them with a fever.

SKS Microfinance fired its CEO Suresh Gurumani yesterday, leading to rumours that it was either a personality clash between founder and Chairman Vikram Akula, or some financial irregularities. But no, says SKS:

“There was no personality clash between Akula and Gurumani. The move is in the best interest of the company. There was no financial irregularity involved," SKS Microfinance spokesperson told PTI.

So why would they fire a CEO, after a stellar last quarter? Hmm. There is something black among the lentils. The stock tanked 6% on the news, and a further 1.5% today. 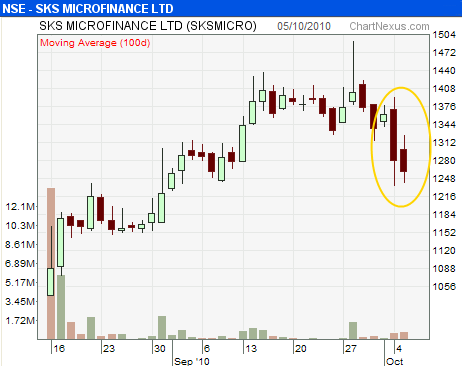 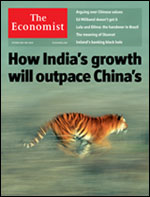 The Economist’s latest cover is on India. This is not good. A substantial number of great stories end when they land on the cover of a famous magazine. The logic is perhaps that by the time the magazines get to the story, it’s so hot that the story has peaked. What has scared me recently has been the number of stories on Gold – though not yet big time cover, the fact that mainstream media considers something so trendy it’s cover-page material is perhaps an indication of overheating. It’s even called the “Cover Story Syndrome” , says Jeff Matthews.

And one of the things that Wall Street types pay attention to when they look for patterns is something called “Cover Story Syndrome,” which is a shorthand way of saying that when investment themes get so popular they appear on the cover of a major news magazine—a dying breed, but the basic idea is still there—then that investment theme is, by definition, too popular to succeed, and maybe popular enough to start betting against.

It is a pattern that occurs more often than you might think.
The Cover Story of all Cover Stories, as any investor with grey hair will tell you, is the fabled “Death of Equities” BusinessWeek cover story from August 13, 1979 (“How inflation is destroying the stock market”), which hit newsstands smack-dab at a market bottom—and indeed helped create that bottom by giving readers the intellectual stimulus to finally bail out.

Fast-forward to June 2005, the peak of those balmy home-buying days of Housing Bubble: Time Magazine publishes a front-cover story on the joys—at least, investment-wise—of owning your own home.

And the magazine cover that triggered the article?

Rethinking Homeownership: Why owning a home may no longer make economic sense.

That’s all for now, folks. Stay safe, while I shift residence because my current landlord was getting a mindblowing deal on this house. The bubble India story is intact.