The HSBC Purchasing Managers Index (PMI) shows a sharp fall from the 60.3 number in Aug to 56.3 in September. (Source: Markit) 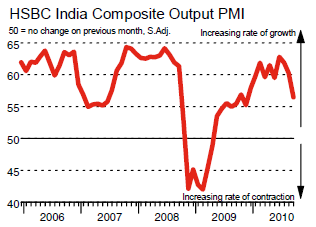 A figure above 50 indicates expansion, and below 50 is contraction. The data doesn’t say we are slowing down, but that the rate of acceleration is reducing. Imagine you’re in a car driving at 60 k.m. per hour and you reduce speed to 40 k.m. per hour. You’re still going forward! But of course, if you’re slowing down because you have no gas left is a sign of trouble. Gotta read the signs right.

From the press-release, Frederic Neumann, Co-Head of Asian Economics Research at HSBS says:

“India’s service industry is stepping off the throttle. Along with the manufacturing sector, growth is slowing, although the expansion continues. Price pressures, however, have not eased meaningfully, which represents a challenge for the central bank. The pace of hiring has slowed as well, even if it remains in positive territory. All this suggests a mild easing of demand growth since the red-hot pace earlier this year, but is hardly enough to relax the guard on inflation. Monetary officials may still need to tighten further to avert price pressure from becoming entrenched.”