Grabbing data from TRAI, I managed a few quick graphs on what I’m really looking for.

First, a generic look at the Telecom growth in India. Phenomenal, with telecom penetration at 58% in July 2010 compared to 24% in Jan 2008. The recession has been kind! 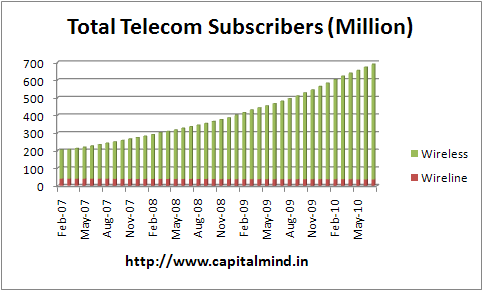 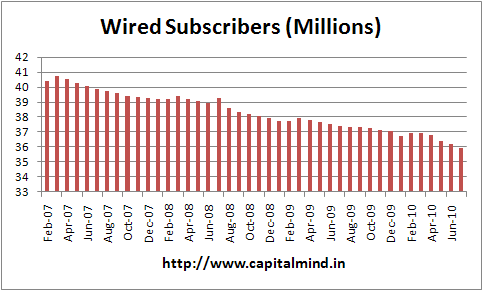 The unfortunate part about that is that broadband connections are currently only possible through a wired connection. Yet, the broad band growth is highly impressive! 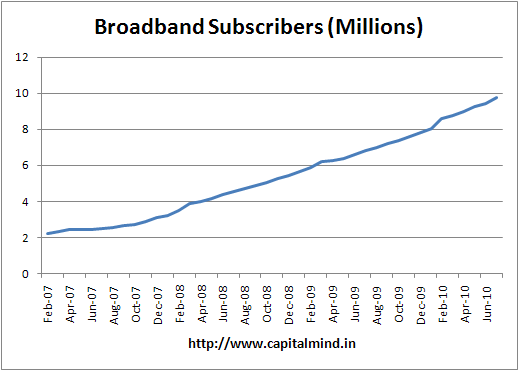 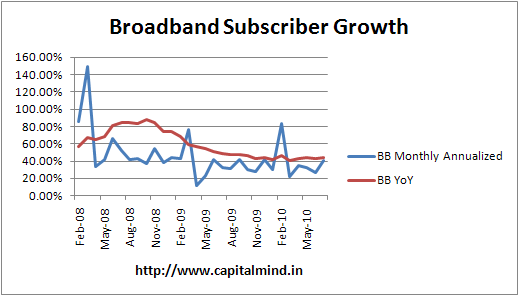 That might not mean much to most of you – but when I did my last startup (Moneyoga) the data was truly disappointing with less than 40 lakh (4 million) broadband subscribers in 2008. But since then growth has kicked in – today, we seem to have about 97 lakh broadband subscribers. This probably reflects the total number of Broadband connections in India (at 97 lakh) not just users – so there are likely to be many more users.

Wired connections should pick up too – unless the 3G and BWA connections make broadband available without a wire running into your house. I had a WiMAX connection in Mumbai which gave me a 1 Mbps connection with a simple antenna, but that hasn’t scaled to the rest of the country yet.

Broadband means video is accessible, and that hopefully this growth story will continue and push broadband users into 2-3 crore (20 to 30 million) soon, which should help the Great Indian Internet Startup Story which currently seems to have a lot of interest, but not many serious exits.

This is quite exciting for me because my next venture will be in online video, specifically for the Indian market. Details are sketchy. I’m not in “stealth mode” – I currently don’t have anything to show, which is why talking about it is futile, would much rather show you!