Consider for instance, the period between 1994 and 2003 when the economy grew every single year, clocking average GDP growth of 6.8% a year. What did the Sensex do during this period? Shocking, but during this very period, the Sensex was down a massive 39%! So the idea that you should hold on to your stocks, or buy some more since India’s GDP growth is going to be strong, is bunkum.

There are similar instances from other economies too. Asian economies like South Korea, Taiwan and Japan enjoyed some periods of scorching economic growth in the latter half of the 20th century. Surely, their stock markets were on fire too, as expert views would suggest. Not quite.

Taiwan clocked a GDP growth of over 5% between 1990 and 2008. How did its stock market fare during this period? It fell almost 50% from its level of 12,000 on January 1990. Taiwan’s economic growth story is one of great success but its stock market performance is one of the worst in the developing world. It pays to look at facts before peddling an opinion.

Can’t deny they have a point. Stock markets are hardly a barometer of the economy – consider that from Jan 2008 to now, the stock markets are FLAT – but on a nominal basis, our GDP has grown about 40% (from 49 lakh-cr. to 69 lakh-cr.).

Overall, the market-cap-to-GDP figure may not indicate that we are NOT in a bubble. But could a high figure indicate we ARE in a bubble? I’m not sure about that either. Look at a long term chart (thanks Kaushik, [Source]) 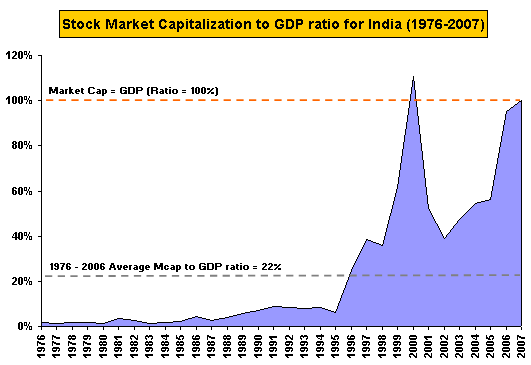 and a chart I made for after that:

We’re still above the 100% mark – and historically, crossing the 100% mark has not lasted too long – about six months. But then the US has spent about 13 of the last 14 years above 100%! (source: Barry Ritholtz and The Chart Store) 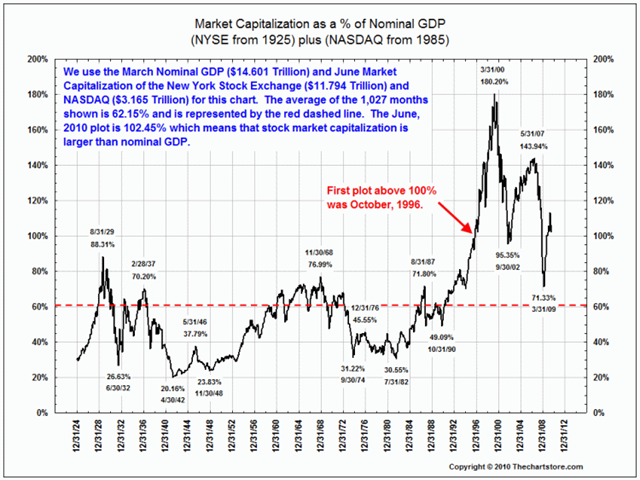 Conclusion: Move along, nothing to see here. I doubt this is anything more than just a correlation – there’s not much weight in the idea that stock market capitalization relates to GDP in any meaningful way.  Of course, I would love to hear alternative thoughts.