In a flat market, it’s always useful to look at stocks making new highs. I’ve seen a lot of action in the small and mid caps recently, but in the last few days one large cap has shown an exceptionally strong move.

Tata Motors made a fantastic move today, up 6% (on the future – the cash was up lower due to a dividend ex-date issue). 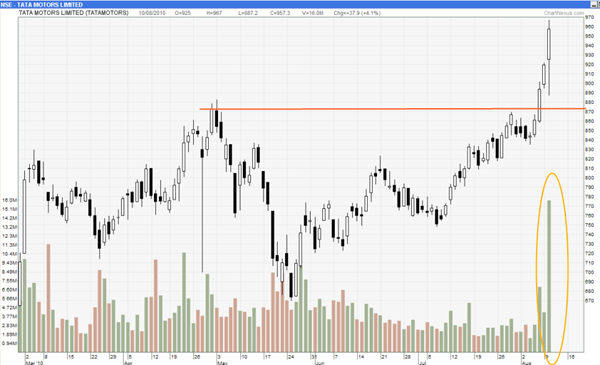 On a standalone basis, though, Tata Motors made just 395 crores versus 514 last year, but that was largely through an “Other Income” figure of 318 cr. last year from investment profits.

At Rs. 960, if the company makes a Rs. 100 EPS this year, Tata Motors is going to be one of the cheapest auto stocks in India – and the only problem now is the high interest rates in India, and the potential that interest rates increase abroad. Also, their financing has been quite complicated; it’s likely to show some dilution in the coming months if their stock price remains this high.

On a technical note: The stock did a tiny flag and a weirdish-cup and handle pattern on strong volumes. A tiny signal came in around 875. I’d expect a retracement of part of this move, seeing that the stock’s had five continuous up-days, but this stock has a 5 lakh futures contract which is too large for small portfolios – trade with extreme caution. Might consider options instead.

Disclosure: Have positions. Hedged, but I do benefit from stock going up.