Club Mahindra (Mahindra Holidays) announced results on the 26th and the stock’s been seeing bad days. They highlight an occupancy ratio of 85%, but unfortunately the numbers seem to indicate that they are losing revenue at an alarming rate.

Look at the numbers: 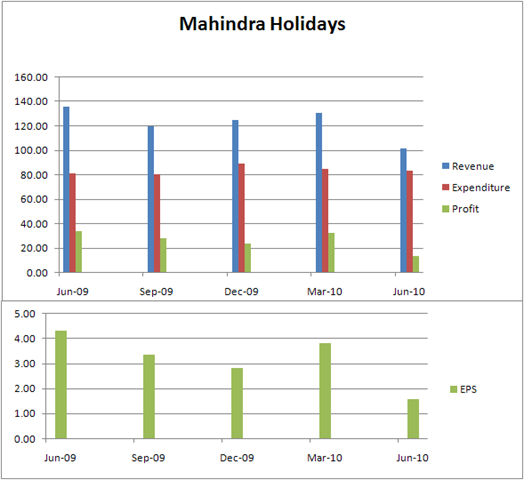 Revenues are down, expenses remain the same, and profits are way down. EPS is down 63%. They a trailing 12 month EPS of 12 and a market price of 491, which don’t quite make sense – which is probably why the stock has lost about 20% in the last three days. 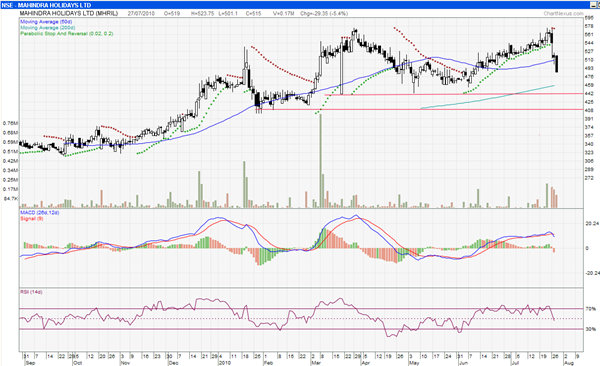 Technically there should be a support level around 450, where the 200 DMA is, and further at the 400 levels. MACD and RSI are clearly negative in the short term. You could expect a dead cat bounce soon because of fading volumes on the downside, but there has not been much strength into the recent rise in the stock.

Also, that they are “overbooked” with respect to number of members and number of available rooms. Even if they took no walk-ins (remember, they do, you can book as a non-member too) they will leave about 30% of their members unsatisfied – and that percentage has not changed much in the last year.

Read my other posts on MHRIL – on their December 2009 results and my analysis of their IPO.

An company official told IANS on the condition of anonymity that the company has scrapped the 60 month equated monthly instalment scheme for enrolment membership.

“During the quarter, the management initiated a number of measures to strengthen its acquisition process and took various steps to enhance customer satisfaction. These initiatives while impacting the numbers in the short run will benefit the company in improving productivity,” Chairman Arun Nanda said.

On the reduction in sales and marketing expenses, he said the focus is now on getting prospective client lead than other advertisement spend.

And from India Infoline:

Total income from operation for the quarter ended June 2010 declined by 25% to Rs 101.78 crore. The decline in the sales is due to stringent measures taken by the company. MHRIL has increased down payment from customers to 15% from 10% earlier. Maximum number of installment also decreased to 40 months from 60 months earlier. This stringent measure will decrease the number of cancellation. Operating profit margins crashed by 2090 bps to 22.6% due to increase in the costs and lesser revenues. Finally net profit fell by 61% to Rs 13.29 crore.

Disclosure: No ownership. And I won’t be buying anytime soon. This is an “ok” stock with a very expensive price-tag.