(This is an article I’ve written for a new online site – link later, not something I own)

As we get increasingly connected, it’s easy for information to flow quickly through the ether to the entire world. In a game of Chinese whispers, what is first said varies significantly from how the last person hears it – everyone in the middle adds a little bit of misinformation, however involuntary, and that can change the entire message. Today we have the power of the internet, but with the messages getting increasingly complex, it’s just a sophisticated game of Chinese whispers.

The Ministry of Statistics released the Index of Industrial production (IIP) lately. The headline figure was that we scaled down dramatically from the 16% in April to only 11% in May, something that caused Indian markets to dip in surprise before recovering ground.

But there’s more to it. Looking closer, the IIP figures vary wildly on a month by month basis, due perhaps to the seasonality of such data. Indeed a better view of IIP may be to use seasonal adjustments to make the data comparable month-on-month. Indeed the kind folks at cycle.in have create a seasonally adjusted data series of key indicators, including IIP. With the seasonal adjustment, the IIP change is already below 10% annualized change, for the last two months, not including the current data point (which will likely be added soon). 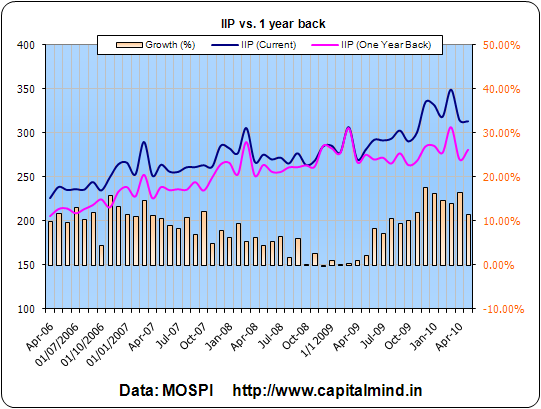 Last year, the IIP Index shot up from 269 in April to 280 in May – a 3.5% increase which has no parallel increase in this year. This higher base will contribute to a low headline number next month as well (June 2009 saw another 3.5% increase from May 2009), so I would not be surprised to see a figure of 9% IIP growth next month as reported.

Apart from seasonality note that last year was special – there were elections. The seemingly better results –a mandate of more stable majority, and the cutting off of the communist parties – would have prompted industry to rejoice and therefore bump up industrial activity. In a global context, the world has been full of money with governments in the US and Europe attempting to stem falling economic actively by pumping money into banks. A small portion of that money, significant in the Indian context, had seen money flow into emerging economies and contributed to higher industrial activity here.

Finally, the IIP numbers get revised twice, and often, dramatically. The headline figure reported last month – for April 2010 – was over 17%. With the first revision, April has already been reduced to 16% and there will be yet another revision of the April number in August. In the past we have seen changes in this reported figure, of even 3%! (Unfortunately, none of the announcements have been archived at the ministry)

The problem then, of relying on data to make decisions is to attempt to “clean” that data as much as possible. Revision of numbers will never go away, and neither will one-time events that change our economy. We have to learn to interpret data appropriately, instead of calling a slowdown based on a single data point that in itself isn’t reliable.

Increasingly, we rely on analyst “estimates”, and shape our opinions based on whether something was “better than estimates” or worse. This is a format preferred by TV channels and media; an instantly comparable figure makes for a great sound bite. Yet, if you look deeply, analysts have barely ever got it right. Most analysts had predicted a Sensex Earnings Per Share (EPS) of 1,000 for 2009, even in 2010, the EPS is still 840, a good 16% away. In the US, analysts have been consistently wrong for a decade, by as much as 50% when it came to estimating earnings growth of the S&P 500.

It’s not much use to consider analyst estimates as a barometer; we should perhaps rejoice when their estimates aren’t met.

On a happier note, the latest Purchase Managers Index (PMI) for India shows a 2 year high number of 62 for June. 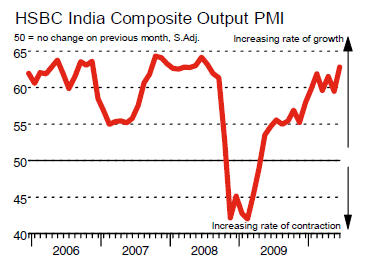 While this tends to be an early indicator, it’s been consistently showing strength; the upcoming result season for listed corporates will confirm. That might just be it right there –confirm a “correction” or “slowdown” with multiple other, independently collected reports, instead of relying on a single, apparently unreliable figure like IIP.