Every once in a while I marvel at the brilliance of a song or it’s picturization. Maaeri by Euphoria is just unbelievable. The song is awesome and the video does it justice. 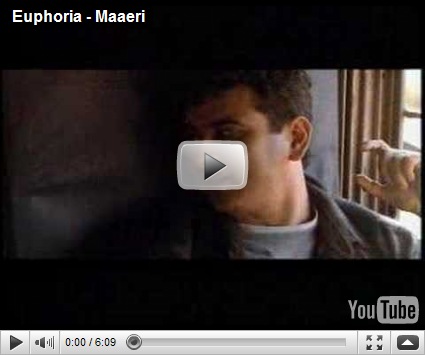 I loved the maaeri video…more for it’s context than the story line which is the standard ole lovers forced to get separated, woman gets the arranged marriage, man gets the song, and then walks in next woman. Somewhat like the song in Munna Bhai MBBS. Not much of an ishstory.

But the context of the video is brilliant. It’s like going home. The trains. The fields and mud roads. The sitting on bags and singing – heck I’m not much of a singer but I can do that clapping thing quite well. The woman carrying flowers or something on her head. The one rupee coin run over by a train.

And the background – right through the video, there’s faded action in the background. Man fights with TT. Vociferous hand raising on the platform. People walking, leaving tractors behind. A man warming his hands on a makeshift fire. The sugarcane laden cart, the girls running around a tree, TT colliding with sleeping man, the punjabi dad getting miffed about man’s hand on daughters shoulder (that scene is crafted brilliantly), and the casual juxtaposition of a woman with a Shiva photo. And the hariyali all around.

You can just about smell it.

Or I’ve been a city boy too long.

Either ways, I miss the country.

Off-topic. But such is life.