Ólafur Grímsson, Iceland’s president, said that a significant eruption is likely soon at Katla. Katla is a HUGE volcano next to the recently erupted one at the Eyjafjallajokull glacier, which disrupted flights within Europe and North America for nearly a month.

If it blows, it’s likely to first ground a substantial number of flights in that general area, and even perhaps all over the world. Volcanic impacts can be quite devastating in a number of ways:

"Eyjafjallajokull has blown three times in the past thousand years," Dr McGarvie told The Times, "in 920AD, in 1612 and between 1821 and 1823. Each time it set off Katla." The likelihood of Katla blowing could become clear "in a few weeks or a few months", he said.

Iceland is built on a volcanic rock on the Atlantic’s mid-oceanic ridge and it has grown used to eruptions. The southern village of Vik, close to the current eruption, has for centuries had an escape plan in which everybody runs up to the church, which is built on high ground. They know that if Katla erupts flooding will follow.

The island’s worst eruption in modern times was in 1783, when the Laki volcano blew its top. The lava shot to heights of 1.4 kilometres and more than 120 million tonnes of sulphur dioxide was released into the atmosphere.

A quarter of the island’s population died in the resulting famine and it transformed the world, creating Britain’s notorious "sand summer", casting a toxic cloud over Prague, playing havoc with harvests in France — sometimes seen as a contributory factor in the French Revolution — and changing the climate so dramatically that New Jersey recorded its largest snowfall and Egypt one of its most enduring droughts

and further in history:

And of course Katla is a big one able to blast two orders of magnitude larger.  That makes it in the same class as Hekla.  Hekla’s blast in 1159bce ended the Northern European Bronze Age and inflicted damage in the Middle East.  The tsunami knocked out Atlantis and its sea people culture.

Volcanoes are the one event that is able to actually destroy civilizations.  We should never forget that.

Another potential is that the earth could cool substantially over the next two years. Katla is likely to be a major eruption, and is likely to throw volcanic ash into the stratosphere, which stays on for years and blocks sunlight. The last large eruption of Mt. Pinatubo in Philippines (1991) took mean world temperatures down 1 degree C. (In the world of global warming this is MASSIVE. We have seen just 0.8 degrees C of temperature changes since 1880)

To Markets: The volcano isn’t likely to directly impact life (Iceland has a population less than Dadar in Mumbai, and are evacuating the few that live in danger areas). But we should see:

Of all the devastations we humans can cause, nothing comes close to Nature’s strength. 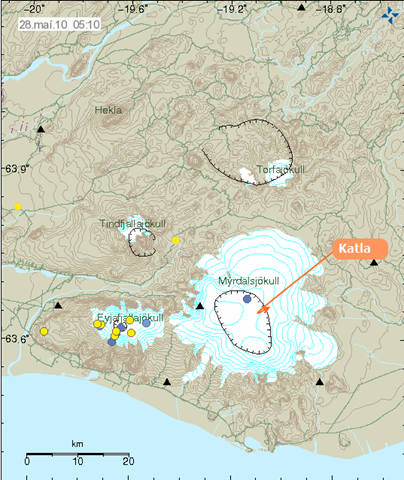