And it’s not about the debt, it’s about the bailout.

After huge tax raises, and massive cuts in spending, Greek protestors have taken over the streets, says the Financial Post. (Pics at the Business Insider).

The Athens market has been dropping over the last few months and is now half the value it was in October 09. Still, it’s above the lows of Jan/Feb 09. 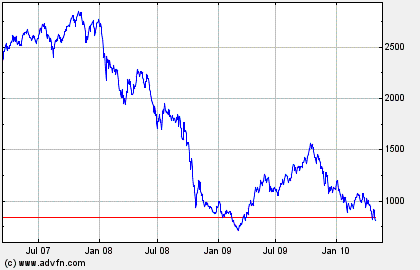 Greece just got a 110 billion euro bailout on the condition that it cuts spending like crazy and raises revenue to reduce the deficit. But that doesn’t help – when you cut expenditure, where do you get revenue from?

Let’s understand this. The government makes revenue through taxes. In Greece, the highest tax rate is 40%. But there’s a very huge amount of “black” – under/undeclared income. And a large part of Greek employment is public sector, which is going to be hit by the spending cuts (two weeks of pay will be cut, and bonuses too). Given the black part, most of government taxes are coming from government spending itself, it seems – and when you cut spending, you’ll cut revenue. The deficit stays.

The alternative? Default. Tell borrowers to take a haircut on the loans. The option of “print money to pay them” is not available – Greece has no control over its currency, the Euro. So if borrowers are asked to take a haircut, who suffers? First, Greek banks. They are likely to be instantly bankrupt, because government bonds are supposed to be ultra safe and a good portion of bank funds will be in government bonds. Then, other European banks that have either bought Greek debt or lent to the Greek banks. Finally, shareholders of these entities.

It’s a tough choice. I’m now thinking aloud. It might be better to simply default and live with the consequences. That means do the austerity thing, that has to be done anyway. But ask creditors to take big haircuts and be done with it. But how do they raise more money, you say? There is way too much cheap money on the planet; once Greece defaults, the money will come if they’re serious about the austerity. If they have to do the austerity anyway, might as well do it without having the debt overhang for what might be a century! It might throw them out of the Euro, but does that matter? Going back to printing Drachmas is probably quite acceptable to everyone by now.

Russia defaulted in 1997-98. On not just foreign currency loans, even on ruble loans, loans for which it COULD have printed money and returned – it didn’t, it just defaulted. And now it’s part of the BRIC and people do lend it money.

Why isn’t Greece doing it? Because everyone wants to dance. If Greece defaults, the contagion will spread really fast. The rest of the PIIGS may choose to default. That will take out nearly all of the banking system worldwide, but what’s left behind will be better institutions. As scary a prospect that is – it will change all our lives in ways we cannot even begin to imagine – it might just be the thing that makes our future substantially brighter than it seems today. I need to make a much longer post – or an article – about this. Right now, it’s just a thought.