DLF threw out impressive results. EPS moved up from 0.94 in the fourth quarter to Rs. 2.51, a fairly large gain. The folks at LiveMint aren’t impressed though. Realizations per sq. ft. have fallen from 5,000 to 4,180. They sold about 12.5 million sq. ft. in the whole year, lower than the 15 million expected, and the costs are now skewed towards interest (they cut salaries, land costs but interest nearly doubled) Even on a yearly basis, they have a consolidated EPS of 10.18; substantially lower than the Rs. 26 they had last year.

The stock’s recovered from the lows of 120 early last year, but has sorta peaked out, volumes have dropped, and it’s below long term moving averages. A the lower end supports are at 280 and then at 255. The stocks been very rangebound, but in the very short term I wouldn’t go short on it. It’s been losing steam on declining volumes, and there’s some early signs of a short term upswing to perhaps the 320 levels.. 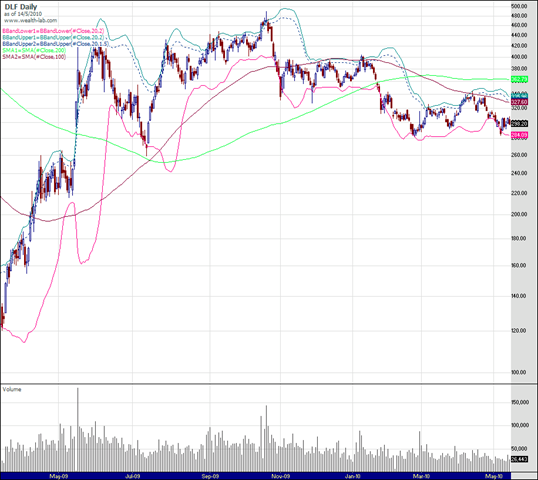 If anything the stock has great options premium, so I’d sell some deep OTM calls (disclosure: have already done that this month and booked my profits) or call spreads around the 360 levels, for June.