Lately, as the stock market refuses to give a rat’s ass, we have been inundated with major concerns about the global economy. Some of these offer comfort to those that have “sold off” their holdings recently, believing it is a top (and it might be, I’m not predicting either ways). Or to those that are flummoxed by price rises in the face of really bad news. This includes me for the most part, so don’t think I’m being facetitious.

But let me list what I hear from the channels as a huge negative for the future.

Government debt is a concern. With Japan’s debt looking towards 200% of GDP, US with a massive deficit that needs financing rollovers and even the UK in some serious debt, this is looking dangerous. Debt is all right as long as it can be financed; Japan’s 200% of GDP is financed at nearly 0% because of their low interest rates and the fact that their local population prefers to put money in government bonds at whatever low rate they get. So they get by. But will it work with nearly all of the developed world?

But remember, this can take years to unravel. Debt can be rolled over, or “temporary financing” put in place when required. These are governments; they don’t give up that easy. So while the concern exists, it’s probably not fair to think of it as imminent tragedy. Life, in this business, runs in slow motion.

PIGS are a problem. That’s Portugal, Ireland, Greece and Spain. They all have huge problems with debt and deficits and economy, and Greece has been in the news lately. Greece is likely to be bailed out – either by the IMF or by the EU, and some austerity measures forced to make them reduce deficits and spending. But in an economy that’s more than 50% government spending, life will be tough, and the Greek rich money is flowing into banks that aren’t, well, Greek. PIGS is not just a problem for those countries – the banks of other nations, Germany, UK and France specially, have a huge amount of that debt, and a default can cripple these other economies. The increasingly networked world at play.

Again, this is a slow motion game. Remember Iceland and how they said it would destroy the world? Nothing’s happened. Yet. And “Yet” is key – the repercussions can take years. Greece may be bailed out, some other country may default, but the impact of that is not likely to be sudden; the bailout, discussion, rescue, hostage processes take enough time that it’s not a sudden sharp dip for what you really might care about: your investments. (Unless, of course, you’re a bank that lent to these countries)

Inflation is going up. This may be only India for now. Inflation is about 14% at primary articles levels (released every week) and about 10% at the overall level (released every month). But we might be at high points because of the low base effect of last year. Look at the monthly graph: 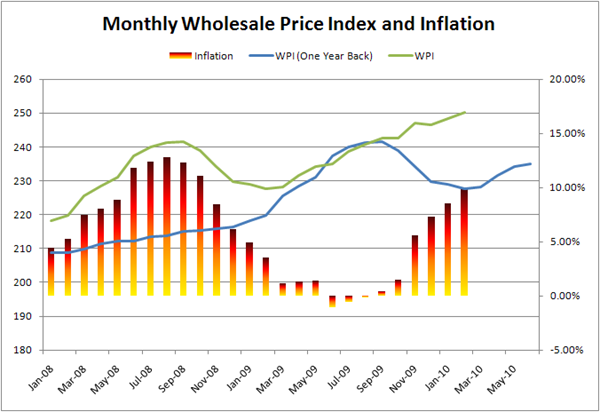 From here, inflation will seem benign because the index started to appreciate from Feb 2009. The primary articles inflation, too, seems to be scaling down a little bit: 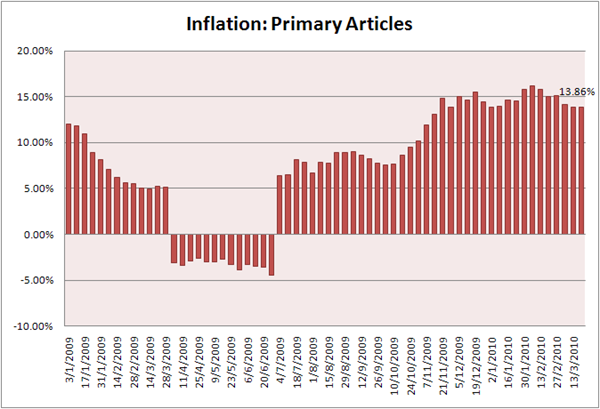 While inflation remains a problem, it’s been high for the last six months. Markets have only gone up – remember inflation is good for stocks. Even as inflation remains high, and interest rates have started the up-cycle, there’s been very little pressure on stocks or on overall lending.

China and Dubai and <name the country> is a big looming issue. Yeah, and they will be for a while to come. But so what? Japan has been a problem of sorts for more than 20 years, and they’re still doing ok. Things can stay irrational longer than we can stay solvent; betting against them is going to need the kind of patience and deep pockets that Jim Chanos has; I certainly don’t.

Real Estate Collapse. In the US, commercial real estate is a concern, as is residential. There is no meaningful recovery in the market, foreclosures are increasing and very few of the programs instituted to rejuvenate the industry show potential. The market is huge, and banks have been allowed to hide away problems by rules that suspend Mark-to-market accounting.

In India, real estate has rebounded so fast it’s plain scary. I am bombarded by SMSes, radio ads and flyers about properties, how they are the best thing since sliced bread, and how I am a total loser for not wanting to invest. The bubble in the industry is huge, and a broker told me it’s probably the highest employment generating industry in India – from brokers, to construction workers to cement and steel factories to architects to fellows-who-help-register-property. What happens if there’s a bust?

Again, timing is the issue. This is another slow motion industry. If you’re in the middle of a big bust you will hardly know about it. After a few years, someone will realize that prices were down a few years ago. What’s telling to me is that real estate stock prices haven’t recovered much in the last year, and that might tell you what someone else knows – things on the ground aren’t as good as they appear in real estate advertisements.

We’ve gone up too fast. The recovery of 2009-10, of most of the fall has spooked investors. Why did we gain so much? The better question to ask perhaps is: Why did we fall so much? Our GDP growth is nearly 8% – which is not bad at all considering all other economies seem to be in the toilet. If we fell because of sentiment, we got back up because of sentiment.

Sure, it’s concerning; we’ve had a very fast ride up in the last few months. But the skepticism is unbecoming of a market that is about to crash, you might think? When people think the market is overvalued, things don’t fall very easily – simply because there are not enough sellers. For those that invested in Feb 2008 after the first 20% drop, today’s value is just about break-even; and that seems to have prompted some small selling. But foreign investors continue to buy – they have bought EVERY SINGLE day since Feb 26. Too many buyers, not enough sellers – prices will rise. But reasons are not what I’m looking for – I’m looking at the price. It should go down, but it’s not. And that’s telling me something.

All the above concerns are big, major, life-threatening etc. But is it right to be a skeptic and let go of great investing opportunities because of them? I’d doubt it. There are still fantastic companies waiting to be discovered, opportunities starved of capital and the next big thing around the corner. The IPL has done well; Indian made mobiles are cutting into the global giant shares (how can you ignore a blackberry featured dual sim mobile at Rs. 4500? That’s Micromax), and car sales are going really strong. Credit growth is greater than 15%. While global concerns can be depressing, it shouldn’t dissuade us from participating where the upside odds are in our favour