There is only one rule for the NAUKRI stock. If they announce bad results, the stock goes up.

For the last two years, the Trailing Twelve Month EPS has been between 20 and 23 and it is now near the low of the range. The profits have hardly grown much, even in a job market that has seen a substantial recovery, or so we are told. 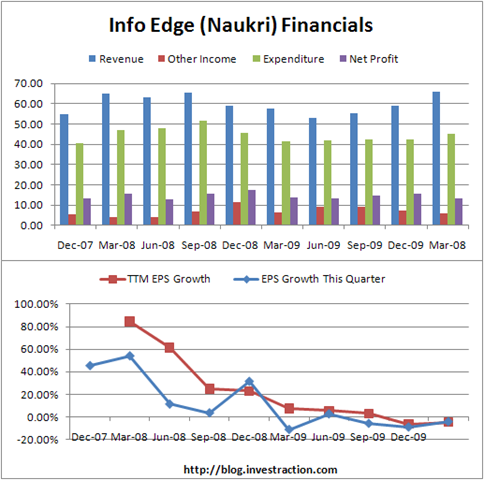 This time, the cash flows are negative. But that’s just a little accounting thing – they’ve moved from fixed deposits to mutual funds (the latter being “investments” and therefore not cash equivalents). Overall, they have 107 cr. in MFs and 277 cr. in FDs, making for a cashable hoard of 384 cr, up from 340 cr. last year. With 2.73 cr. shares, that’s Rs. 140 per share in just cash.

Scary bits: insiders are selling hand over fist. Kapil Kapoor, the non-exec Chairman, has sold 68,000 shares just this quarter. That should have netted over 4 crores, and he’s sold another 70,000 last quarter. Sandeep Murthy, another big-name director, has sold around 50,000 shares in the year. The plus point is that management – Sanjeev Bikhchandani, Hitesh Oberoi etc. have not sold their shares.

Naukri’s been doing some improvements to their sites lately, though I’ve not used their main site (naukri.com) too much, or the jeevansathi type portals. I do use 99acres.com a fair bit, and I’ve seen allcheckdeals too. But I doubt it’s worth the 45 P/E they are getting now, especially since they have shown an EPS growth of about zero in the last eight quarters.

And it’s equally important to say that every time I have dissed their EPS growth, the stock has gone up, so if you’re the quant type, this is probably a great time to buy. (I don’t have any holding and don’t plan to either)