It’s a very early start to the week for me. At 6 AM on Monday, I’m going to groggily wish you all a very good morning.

The stock market is just going up. Nearly every market across the world is. India’s no exception and cheap money has flooded the NSE and BSE here too – there has been continuous FII buying (not ONE net-sell day since Feb 25).

So why is everyone so bearish? Every thing I read tells me people believe we are close to a top. The last time we hit the 5,300 levels on the Nifty people said it would fall, it fell to 4,700, and it’s back up to 5,300 again – in fact, the highest closing in two years. The price tells us a lot – perhaps it’s only sentiment – but if you combine elements of public sentiment (bearish) versus market moves (bullish) it’s hardly a sign of an impending crash.

For a “sudden” and deep crash, we must see both sentiments being bullish and markets making new highs. So I’d rule out a sudden crash. But if you look at the picture from 1929 in the US – the markets recovered a lot by 1930 and then went on to crash some 80% in the next two years. Not “sudden” – just slow and steady falling with some major rises in the interim. 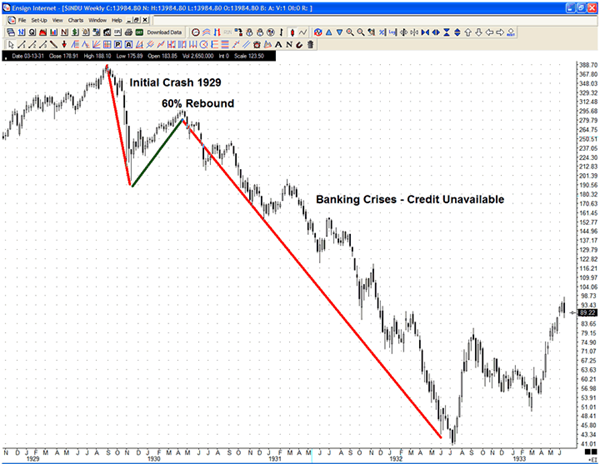 And how is the Nifty in the last few years? 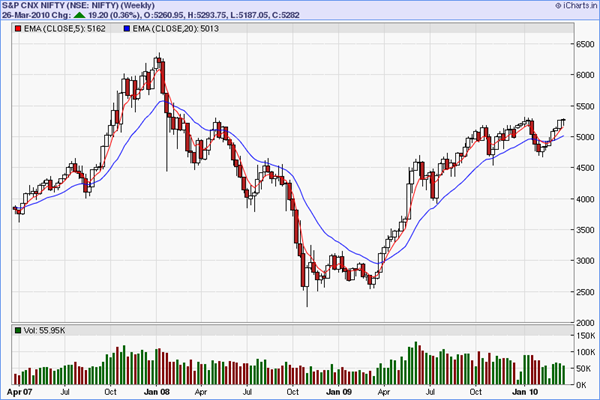 This is the kind of graph on every stock index you might recognise (except perhaps Shanghai which has not recovered quite this much).

It is too early to say we’ll crash – perhaps we won’t. In the short term, it’s irrational to be short based on “I think it’ll go down now”. A better way to short would be to buy puts. The low implied volatilities (“time value”) in options nowadays calls for some buying, though this should be a bet size that you can afford to lose. (Less than 10% of portfolio).

Triggers to the downside are many – from high unemployment in the west, higher interest rates in India, withdrawal of the earlier stimulus, increase in country risks and defaults, popping of the real estate bubble or anything bad happening in China. Those are usually reasons to go short, when they start looking more and more probable.

But the primary direction the market is giving is “up”. Must wait at least till prices show a potential breakdown when individual stocks start selling off and going below their near time averages. Or the market volumes pick up on the downside (rather than low volume down days and high volume up days) Some early and potentially fake signs – the advance-decline ratio is weak and going back towards 1.2 which is a relative low and usually marks a reversal. (meaning, the breadth of the upmove is weak).

Some stocks are really breaking down – the Oil Marketing companies (BPCL) and Sugar (Bajaj Hindustan) are examples. Yet others are making fresh ground and all time highs – Hero Honda and HDFC Bank, for instance.

As much as I’m pessimistic about valuations, the short term trend – important for an F&O position trader – is up. It doesn’t mean “go long” – it means going short has disadvantages, and the odds are against you in general. But a focussed short or long strategy on individual stocks will be a better bet. And low volatility begets high volatility, so all bets are off if the prices start to reverse.

Have a good week.