Our government is going to issue a truckload of bonds next year, so let’s see where we are right now with respect to current bonds outstanding.

This is quite high – and the taxes mentioned are gross amounts – net of state sharing, and including certain non tax revenue items like dividend and interest received, the real revenue of the government is just 682,212 cr. – interest being paid out is 21.5% of that!

Let’s then look at how much is maturing in which year: 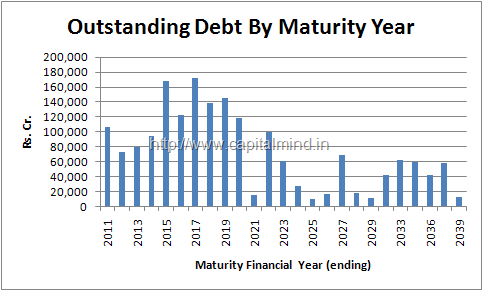 You might think: Hey – we are borrowing 106,000 cr. to pay back people we had borrowed from earlier? Isn’t that ponzi? Welcome to the world of government financing. And indeed most capital market finance.

(Note that this looks very good when applied, for instance, to western countries. The US will probably need to borrow $2 trillion If they do REALLY well, they will grow their GDP by about $700 billion).

Also we’re slightly better off than countries abroad in terms of debt to GDP, but our interest payments are WAY too high (20% of revenues is not a good thing – the US is at 5-7% and they are getting worried).

So what is the effective interest rate we pay? Overall, our payout is at 8% (considering all maturities). On a maturity year basis: 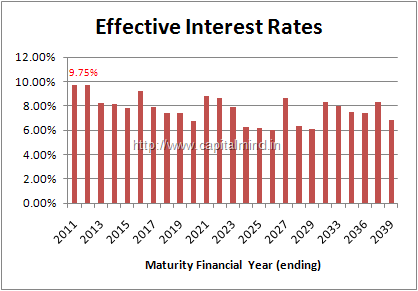 The most expensive debt is maturing in the next two years – at around 9.75%. If we are able to roll this over to say 8% yields, we’ll save about 3,500 cr. in interest on the same amounts. Look then at the distribution (the ultra low figures are floating rate bonds). 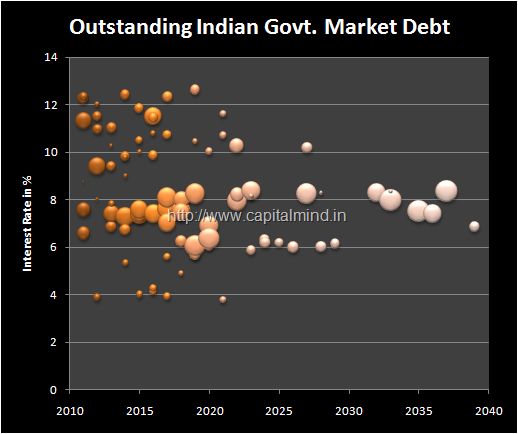 The size of the bubbles is the amount of debt outstanding. We have a small amount of leftover debt from really long back, at high rates; ignore those. But above 10% you notice a few large bubbles maturing in the next four-five years – those hurt us the most, and we need to roll them over at lower rates. But since the RBI is on an interest rate RAISING cycle, and inflation is already at 10%, it’s going to be a tug of war between RBI’s raising rates and the government balking from paying higher interest when rolling loans over.

A significant chunk of borrowing matures in the 2015-20 timeframe, and I’d imagine we have two choices – either have high inflation and thus devalue this debt to the point where it’s easy to pay back (remember, all this debt is in rupees) or scale to a current account surplus so we don’t need to refinance most of it.

The next year will be tough for the RBI – for controlling inflation and placing government bonds. In an environment where private players are willing to pay more and are now strong, government debt placement will be even more difficult, unless we let foreigners hold our debt. But if we do, that screws up the rupee-dollar equation; like I said, tough year for the RBI. A crisis of any sort, and we have to get back to the drawing table. (If we ever left it)

I presume this will be an ongoing task to keep the outstanding debt profile mapped. I’ll try and make a post every month, keeping a tab of all new issuances, maturities and buy backs.