Bharti has issued terms for the the Zain acquisition (read more here). From Mint:

India’s Bharti Airtel, in talks to buy the African mobile operations of Kuwait’s Zain for $9 billion, has issued a term sheet to banks to raise up to $8.5 billion in offshore loans to fund the deal, banking sources said.

The six-year offshore facility has four tranches and carries a blended average life of 4.75 years, with a margin ranging from 176 basis points (bps) to 179 bps over Libor, the sources said.

Previously, Bharti was said to be looking for a $9 billion facility, which also included an onshore rupee tranche.

Bankers familiar with the deal said that the all-in pricing is below all expectations, which ranged from 200 bps to 250 bps above Libor.

We don’t know what Libor they speak of, but current 1-year Libor rates are 0.87%. So this will be a really cheap loan.

Additionally, some of this loan may actually replace existing loans taken by Zain, upto $4bn of it, so says Mint. That means the new loan is only $5bn, which at the 3% rate they are getting above, will translate to $150 million – no great shakes. EBIDTA is at $1.2 bn currently – all they have to do is improve EBIDTA by 10% and they’re home.

Bharti is bidding for 3G spectrum too in India, and that will also need to get funded.

This might just be it. I mean a trigger for a great story going ahead too – the fundamentals look very good in the medium term. But they are fundamentals – by that I mean we don’t know the details, and the devil is there. Even with all this news – and a new relative market high today – Bharti didn’t move up; does that mean the institutions know something you and I don’t? Why doesn’t price follow?

In the short term, Bharti is a buy. In the medium term, on fundamentals alone, it’s a buy. The price-action needs to follow through and show some serious volume. I don’t even know how to begin predicting for the long term so I won’t bother. 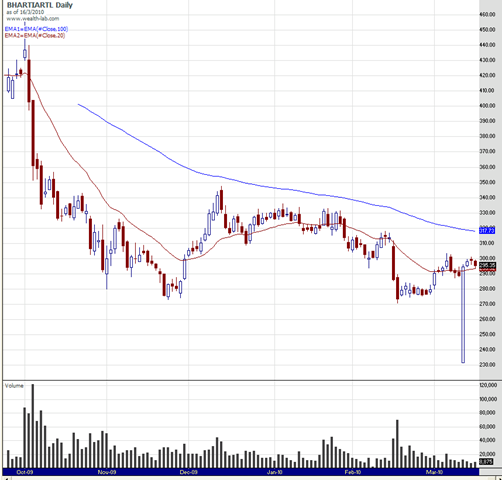 The chart shows some consolidation with low volume – that is usually a sign of a breakout or breakdown waiting to happen. That big bar towards the end is what happens if you rely purely on NSE data. There was probably a freak tick at 230.